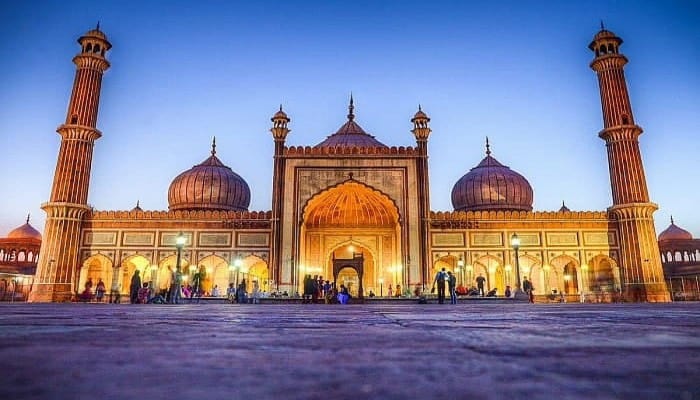 The Jama Masjid in Delhi is a world renowned ancient Mosque that lies amidst a very busy street of Old Delhi near Chandni Chowk and Sadar Bazaar. It also lies approximately 500 meters west of the historical Red Fort and can be approached by local transport and from Kashmiri Gate Metro Station.

The Jama Masjid is also known as ‘Masjid-i-Jahan Numa’ which means the ‘World Reflecting Mosque’ that was constructed under the orders of Mughal Emperor ShahJahan who also constructed the majestic and world renowned heritage called the ‘Taj Mahal’. The foundation stone of this Mosque was laid by Mughal Emperor ShahJahan within the walled city of ShahJahanabad atop a hillock on a Friday dated 6th October 1650 AD to mark its auspiciousness. It took 5,000 labourers to construct this largest, ancient and principal mosque of Old Delhi which was finally completed in 1656 AD which cost the Emperor an amount of Rs. 10 lakhs which equals to Rs. 1 Million.

Mughal Emperor ShahJahan also constructed various Mosques in Agra, Ajmer and Lahore (Pakistan); however, the design of this Masjid was inspired from the Fatehpur Sikhri Masjid in Agra which is a smaller version of this Imposing Mosque in Delhi. The design and architecture of this Jamia Mosque in turn inspired the Badshahi Masjid that was a larger Mosque constructed in Lahore by Emperor Aurangzeb in 1673 and hence are both closely related to each other.

The Jama Masjid also known as ‘Jamia Masjid’ got its named as the ‘Friday Mosque’ due to the weekly ‘congregational prayers’ or ‘Jami Masjid’ held every Friday by Muslims known as ‘Jummah’ that is conducted only within a Mosque which can accommodate over 25,000 worshippers at one time. The mosque is constructed over a flat platform measuring 1.5 meters from the patio sidewalk of the mosque. The courtyard has three entrances on its North, South and Eastern sides followed by three flights of steps that lead worshippers into the interior premises of the Jamia Mosque while the entry into the actual Mosque is led by 39 steps from its northern entrance, 33 steps from its southern entrance and 35 steps from the main and royal eastern entrance. In earlier days, these steps were used by food vendors and entertainers and every evening, the eastern portion of this Mosque was filled with poultry markets and remained really busy and perpetually crowded. The Mosque had housed a Madrasa or Islamic Seminary on its southern portion which was destroyed during the 1857 revolt.

The west facing Jama Masjid has its three sides covered with arched openings with a roof that is supported by thick columns spread at equal intervals. Each of these openings has an impressive and high Tower at its centre which forms the gateway of the Mosque. The Jama Masjid is 80 meters in length and 27 meters wide that is covered by a roof with three domes decorated with alternate white and black stripes of marble and crowned with Gold. It reveals two Minarets or Pillars measuring 41 metres high which is made of White Marble and Red Sandstone consisting of 130 steps leading to the top of the pillar covered with dome shaped roofs on either side. Each Minaret (Pillar) has three galleries placed vertically apart projecting out with twelve-sided open pavilions with dome shaped roofs. There are four small minarets that lie behind the Mosque and are designed like the ones in front.

The main Dome of the Jama Masjid covers a huge Hall within that has seven arched openings that forms the entrances partially decorated with marble and facing the walls and the western side of the Mosque. Ahead of this Hall is the main Prayer Hall measuring 61 x 27.5 metres that has 11 arched openings or entrances with a wide and impressive central arch flanked by thin pillars covered with an octagonal shaped pavilion on each corner. This central arch forms the main gateway of the prayer hall and has a marble slab inlaid over it with an inscription that reads ‘The Guide’. Tablets of white marble measuring 4 x 2.5 feet are inlaid over these 11 entrances with inscriptions made from black marble revealing the history of this Mosque.

The Jama Masjid floor is covered with black and white marble that depicts 899 patterns of a Muslim Prayer Mat each measuring 3 x 1.5 feet and framed with a thin border made of black marble which are especially marked for the convenience of the Muslim worshippers. The mosque also preserves ancient relics within a closet that lies in the northern gateway of which an interesting one is an antique and ancient copy of the Holy Muslim Book ‘Quran’ which was written on the skin of a deer.

The Jama Masjid is the only functional ancient Mosque in Delhi which is opened on all days from early mornings to sunset; however, Tourists need to ensure that they respect the prayer timings of this mosque which does not permit entry for Non-Muslims. Tourists should also ensure to cover their entire arms, shoulders and legs and remove their footwear before entering the premises of the Mosque. Cloth will be provided on request at the Mosque entrance to cover the feet and limbs. Indian Citizens are charged INR 20.00 and foreign nationalities are charged INR 150.00 for photography and for those who want to climb the southern minaret of the mosque, an extra charge of INR 10.00 needs to be paid.