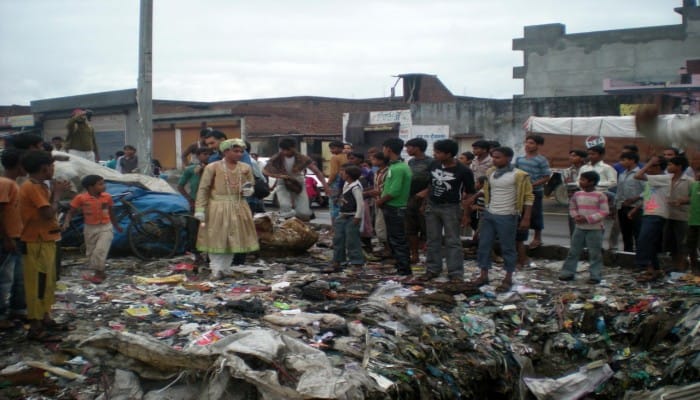 Seemapuri is one of the three sub-divisions of North East Delhi District and just like its neighboring area Seelampur, it is primarily a residential area.

What is Seemapuri famous for?

Seemapuri is mainly a rural zone in Delhi and one of the slum areas of Delhi with a population of more than 10,000 people. The people living in these slums are mostly ragpickers who migrated from neighbouring Delhi and even Bangladesh states. The conditions of this locality are not so favorable for its citizens with a lack of even the basic amenities and a proper sewage or drainage system.  Seemapuri, as a slum area, came into light after Anees Jung’s story, The Lost Spring. In this story, the author has an encounter with small kids who reside in the slums of Seemapuri and pick rags.

The Chor Bazar or the Patri Bazar of Seemapuri is famous among the locals for its cheap and wide range of valuable goods. It is believed that the majority of the goods are sold herelowkey thieves and notorious men stole that. You can find phones, WiFi routers, tools, and much more at this small market, situated along the roadside. The quality of these goods is not of much significance, and the market mainly attracts the locals of Seemapuri.

How to reach Seemapuri?

Seemapuri is located close to Shahdara and Dilshad Garden in north-east Delhi.

Depiction of Seemapuri in the story ‘Lost spring’ by Anees Jung

The story ‘The lost spring’ is based on the lives of two underprivileged kids who are forced to work due to their deprived background, from early childhood. The story has been divided into two parts, ‘Sometimes I find a rupee in the garbage’ and ‘I want to drive a car’. The first story is about a boy named, Saheb, who is a resident of Seemapuri in Delhi and picks rag, as a source of little income. The boy is most excited about the gold he finds in this garbage. The gold here is referred as the ten-rupee note or torn shoes that Saheb sometimes is lucky to find. One day, the author encounters the little boy, working at a tea stall for a salary of Rs. 800 and full course of meals and realizes how Saheb has lost the freedom, which he possessed while being a ragpicker.

The second story, ‘I want to drive car’, focusses on the life of a small boy, Mukesh who aspires to be a motor mechanic one day, despite of what his family has been practicing, since generations, that is, bangle making in Firozabad. The condition of the place where Mukesh’s and other families practice the art of bangle–making are not so good. The tiny cells with no proper ventilation are a hazard to the human eyes. This job provided his family, little to no money and affects the lives of the ones practicing it. But on the contrary, all Mukesh could think about was cars and wishes to be a car mechanic someday.

Some great observations in the story:

To conclude, the reality of this place is quite similar to what it was described in the chapter. Majority of the people here are ragpickers and continue to live under difficult conditions, without much help from the government.

1. Is Seemapuri a village?

No, Seemapuri is not a village but a small town in the northeast part of Delhi. This locality constitutes a large number of slums.

2. Who is the MLA of New Seemapuri?

3. What work do most of the people of Seemapuri do?

Seemapuri is home to about 10,000 ragpickers, who have been in this work for many years. Most of these people have migrated from other states and some fled Bangladesh, in search of better opportunities.

4. Who are the inhabitants of Seemapuri?

The inhabitants of Seemapuri are mainly people from neighbouring states and Bangladesh who migrated to Delhi.

Seemapuri is also divided into Old Seemapuri and New Seemapuri. It has become famous after its reality was brought forth in the story in ‘The Lost Spring.’