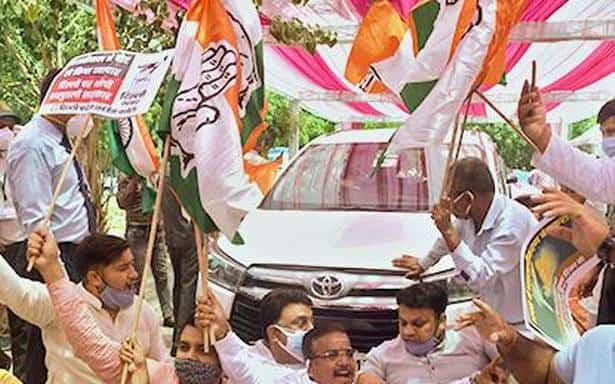 The Delhi Congress on Monday protested outside a drive-in vaccination centre against the Delhi government’s policy of setting up private sites instead of giving shots to all.

The workers along with party chief Ch.. Anil Kumar gheraoed Deputy Chief Minister Manish Sisodia, who had come to inaugurate a drive-through vaccination centre at Akshardham.

The party alleged that the government was busy inaugurating premium drive-through vaccination centres, which would help the private players make huge profits. Mr. Kumar said that Chief Minister Arvind Kejriwal has been fooling the people of Delhi and telling them lies by promising them free vaccination.

“A large number of people are still waiting for their second dose even two months after getting their first jab. The Delhi government has run short of vaccines, while vaccines were available in abundance in private hospitals and drive-through vaccination centres, though these centres charge over ₹1,600 per dose,” Mr. Kumar said.

He alleged that the government has been a total failure in managing the pandemic as well as the vaccination drive.

Several Congress workers were detained during the protest.