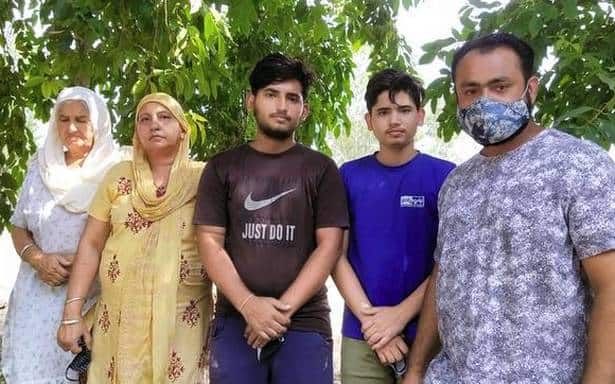 Kuldeep was planning to pursue higher studies in Canada, which was his father’s dream, but now has to rethink

An 18-year-old resident of Laxmi Nagar, Kuldeep Chand, now has the weight of his family on his shoulders. Gurbax Singh, a private taxi driver, had died unexpectedly due to COVID-19, leaving behind his wife, Kuldeep and another son.

A helpless Kuldeep took to his Twitter handle and sought help. Among those who noticed was Delhi Police Commissioner S.N. Shrivastava, who, with the help of the force, arranged ₹10,000 for the youth, now temporarily residing in Punjab.

Recalling the night of April 27 that changed his life, he said his father Gurbax Singh complained of chest pain and breathlessness. He, his brother Gurpreet (16) and his mother Kulpreet took him to a nearby nursing home, but his oxygen levels had dropped to 40.

“We didn’t know what to do. Doctor asked us to arrange for an oxygen cylinder fearing he had contracted COVID-19. I tried over 500 numbers but couldn’t arrange one. That day, the world proved to be so selfish. One person said he’ll sell the cylinder for ₹60,000,” Kuldeep recalled.

A gurdwara in Indirapuram arranged oxygen for a few hours. But when the family was on its way to a hospital to admit him the next morning, he passed away. In a few seconds, Kuldeep’s world turned upside down. He was all set to go to Canada for higher studies. He is now clueless about sustaining his family. Kuldeep, a second-year undergraduate from IGNOU, took the father’s body to Punjab’s Rupnagar — their hometown — for cremation.

“It was my father’s dream to send me to Canada so that I can settle there and eventually take the whole family. I cracked my English proficiency test and also got admission to a college. My father took loans from friends and managed to pay the first instalment but the next is due in July,” he said, adding that over ₹4 lakh have been paid and another ₹4 lakh was due.

Besides, he is crushed by the memories of his father. His father used to address everyone as ‘sir’ or ‘madam’, used to wait outside offices and it was his dream to hear someone address his father as ‘sir’ one day. “But everything seems so blurry now. I am only 18 and suddenly I have the full responsibility of my family, of my brother’s college education, my mother’s health, and my own career,” he said.

Kuldeep said his relatives have suggested they stay back in Punjab, where they can do farming. But Kuldeep doesn’t want to put to waste his and his brother’s education. So the family has resolved to return to Delhi next week.

But unable to find any glimmer of light at the end of the tunnel, he tweeted on Wednesday, “i am kuldeep from new delhi as my father was a taxi driver and he recently expired as i left with my mom and younger brother. We are going through the worst days of life, our situation is getting worst day by day please contact us [sic].”

He had tagged Delhi Police, which immediately sent an officer who was in Punjab for work. The force helped him with ₹10,000 , which Kuldeep has decided to keep for emergency.

“When we go back to Delhi, I’ll have some emergency needs. I’ll keep this money for then. I am very thankful to Delhi Police for it,” said Kuldeep, who said if he is unable to go to Canada, he’ll pursue Civil Service and work simultaneously to sustain his family.