Five mowed down by speeding truck 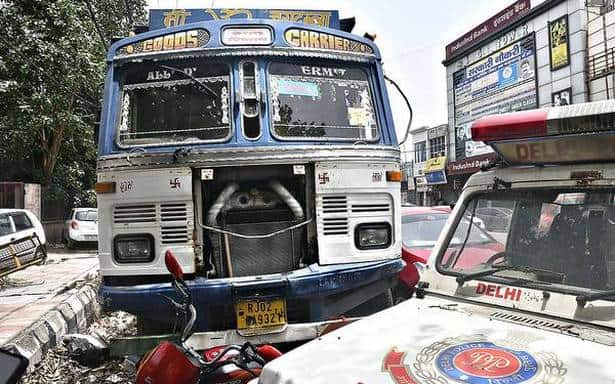 Five people, including four members of a family, were mowed down by a speeding dumper truck early Friday in south-west Delhi’s Najafgarh. The deceased have been identified as Ashok (30), his wife Kiran (27), his sons Ishant (5) and Dev (2), and one Jawahar Singh (93).

The driver, 35-year-old Rajesh, was arrested from the spot.

Ashok and his family were walking along the road to take a bus to visit a temple in Gurugram while Mr. Singh was out for his morning walk, the police said. After hitting the victims, the truck crashed into several parked vehicles.

CCTV footage of the incident went viral on social media. In one video, the family of four is seen walking on the road near the parked cars. Ashok was carrying his younger son in his arms while his elder son was walking with his mother when the truck mowed them down.

“Information regarding the incident was received at 5.19 a.m. at Thana Road police station. Ashok, Kiran and Ishant were found dead at the spot. Dev and Mr. Singh were taken to Vikas Hospital,” Deputy Commissioner of Police (Dwarka) Santosh Kumar Meena said.

They later died during treatment at Safdurjung Hospital.

The bodies have been sent to the Rao Tularam Memorial Hospital for post mortem.

Five vehicles parked at the spot were also damaged by the truck driver’s rash and negligent driving, the police said.

The driver is undergoing medical examination to ascertain if he was under the influence of alcohol or drugs at the time of the incident. He told the police that he had fallen asleep at the wheel and lost control of the vehicle.

A case under Sections 279 (rash driving or riding on a public way) and 304 (punishment for culpable homicide not amounting to murder) of the Indian Penal Code has been registered at Najafgarh police station.

“I was sleeping when the accident took place. The neighbours informed us about it. We reached the hospital and found him dead,” Mr Yadav said.

Ashok worked as a security guard at Vikas Hospital.

“An elderly man was lying on the road and was rushed to the hospital. Later, I came to know that the children who had been hit by the truck were from our family. Ashok and his family were going to Sheetla Devi Mata temple in Gurugram,” said a member of Ashok’s family.