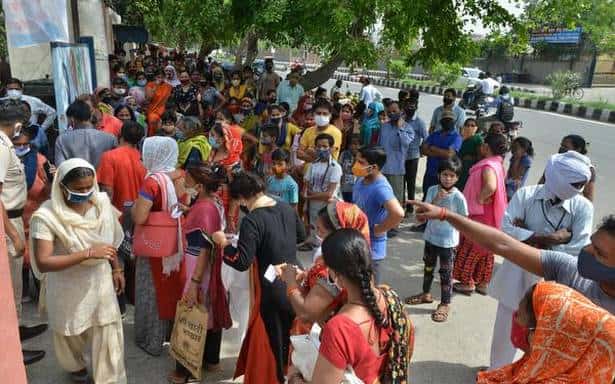 When did the Central and Delhi governments become separate units if it was a matter of people’s welfare, Chief Minister Arvind Kejriwal asked Prime Minister Narendra Modi in a letter, seeking his nod for the doorstep delivery of ration to the poor, here on Tuesday.

Was it prudent, Mr. Kejriwal asked, to have separate schemes entailing separate budgetary expenditure related to the same issue, in this case that of dry ration, especially when the ration in question “belonged neither to political leaders nor the Aam Aadmi Party or the BJP” but to the people instead.

“The home delivery of ration was about to begin. The scheme would have allowed a poor person to get properly packed ration delivered at home instead of being pushed around in lines outside [ration] shops… but suddenly, just two days before it was supposed to be implemented, it was stalled. People are asking why you did so,” Mr. Kejriwal asked in the letter.

Residents have, over the last 75 years, been targeted consistently by the ‘ration mafia’ and while the ration was supposedly delivered to them on paper, most of it was siphoned off, he alleged.

This ‘mafia’ had links “to the top” and no government in the last 75 years has dared to take it on. However, there was now a government in Delhi which had decided to do so — but such was the power that this mafia, Mr. Kejriwal alleged, was again successful in “getting” the scheme stalled a week before its roll out.

The Centre, Mr. Kejriwal further stated, had cited that the matter was sub judice at the Delhi High Court as a reason for not allowing its rollout. However, the Chief Minister argued, if the High Court had not stayed the scheme in spite of this, how could the Centre do so?

Mr. Kejriwal also questioned why the Centre, which was also a party in the case at the High Court, did not express any apprehension about the scheme in the court, why did it do so outside it.

These were difficult times, Mr. Kejriwal said, with the poor not stepping out of their homes for ration despite having nothing to eat and facing economic hardship due to the COVID pandemic. “If we want to deliver ration to needy residents, what is objectionable in that? I believe, given the pandemic, this scheme should not only be implemented in Delhi but across the country,” he said.

“The country is passing through a very problematic phase. It is the time to hold each other’s hand and help instead of fighting…I appeal to you with folded hands on behalf of the 70 lakh poor of Delhi, please don’t stop this scheme, it is in national interest, please let it through,” he also stated.