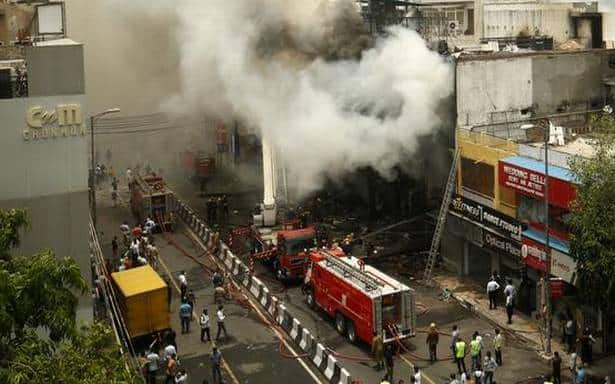 A major fire broke out at Lajpat Nagar’s Central Market on Saturday. No injuries were reported, the police said, adding that a case has been registered.

Delhi Fire Services chief Atul Garg said that a call was received at 10.30 a.m. regarding a fire in a showroom after which 33 fire tenders were pressed into service in the next four hours till the fire was doused.

The Fire department said that the blaze first started from four showrooms and later spread to the fifth shop. Mr. Garg said that the cause of fire is yet to ascertained. He also added that it was due to the firemen and timely response that the blaze didn’t spread to residential areas behind the showrooms. “There were 100 firefighters on the spot,” he said.

The police said that senior officers from the force and fire department reached the spot and BSES and IGL were also asked to cut supply immediately. “The crime team and forensic team were also called to inspect the spot. A case under Section 285 [for negligent act endangering human life] of the Indian Penal Code has been registered and investigation will be done accordingly,” said a senior officer.

Delhi Chief Minister Arvind Kejriwal tweeted: “I am constantly monitoring the situation and in constant touch with the fire department officials”.