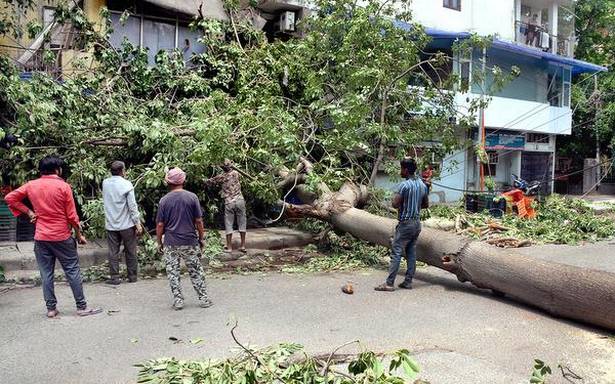 Temperatures fell by up to 10 degrees Celsius after a thunderstorm lashed the Capital on the intervening night of Monday and Tuesday.

The city recorded 15.6 mm of rainfall between midnight and 8.30 a.m. on Tuesday. The heavy downpour caused waterlogging across Delhi and gusty winds uprooted several trees.

The weatherman has forecast more rain on Wednesday.

The Delhi government’s Public Works Department (PWD), which has jurisdiction over most arterial roads in the city, received 40 waterlogging complaints. The first complaint was logged at 7.35 a.m. on Tuesday, said a PWD official.

The spokesperson for the New Delhi Municipal Council said no waterlogging was reported in the area but 17 complaints were logged regarding uprooted trees. The three civic bodies also reported trees being uprooted. The South Delhi Municipal Corporation (SDMC) stated eight trees were uprooted in the Najafgarh zone, 16 in the southern zone, three in the central zone and eight in the west zone.

The North Corporation reported five incidents of wall collapse, two cases of damage caused to buildings and waterlogging at three locations in addition to the felling of 41 trees.

According to the Delhi Traffic Police, no major vehicular congestion was reported due to the weather conditions. A senior Traffic Police officer said they received one waterlogging call and seven calls related to uprooted trees. The officer said that waterlogging was reported on the Mehrauli-Badarpur Road at the underpass near the railway crossing, “but it did not lead to any traffic congestion as the water was cleared in time”.

“Uprooting of trees was reported from Tughlak Road, Akbar Road, Kingsway Camp, Safdarjung Enclave, Rajghat and Najafgarh Road but it had no impact on traffic movement,” the officer said.