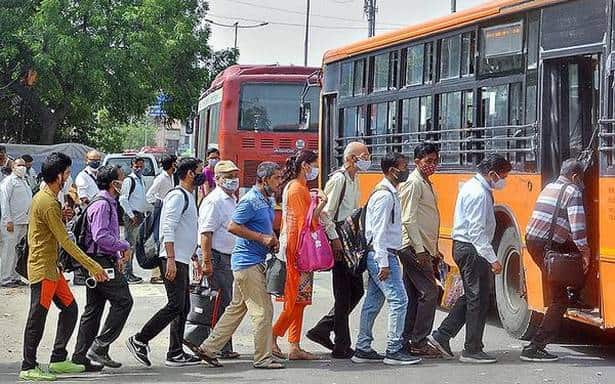 District police also deployed to manage traffic; over 1,200 fined on Day 1 of ‘unlock’

The police on Tuesday said they are finding it “tough” to ensure social distancing in busy markets since the unlock process, which began on Monday.

“Apart from traffic police, District police have also been deployed in traffic management. During morning and evening hours, traffic jam was reported on several stretches,” said the officer, adding that they had to remove barricades at many places to ensure smooth movement of vehicles.

Police personnel was deployed at liquor shops as well to maintain social distancing.

On Monday, the police fined over 1,200 people for not adhering to COVID guidelines. According to data shared by the police, a total of 1,285 challans were issued on Monday. Of them, 1,053 were for not wearing masks, 229 for not maintaining social distancing and three against the large public gatherings or congregations.

“The process of unlocking has begun, and we urge people to follow the COVID-appropriate behaviour. Use face mask when you step out of your house, maintain social distancing and regularly sanitise hands. People should not step out of their homes unnecessarily,” said Delhi Police Additional Public Relations Officer (PRO) Anil Mittal.

While 1,04,440 people were fined for not wearing face masks, 18,034 were penalised for not maintaining social distancing, 1,529 for large public gatherings or congregations, 72 for spitting and 121 for consumption of liquor, pan, tobacco etc., it stated.

On the first day of unlocking, Delhi Police and market associations had made announcements and also distributed pamphlets to visitors, urging them to follow the guidelines.

Chief Minister Arvind Kejriwal on Saturday had announced various relaxations in the ongoing lockdown that was imposed on April 19, saying the COVID situation was improving, and the economy needs to be revived.