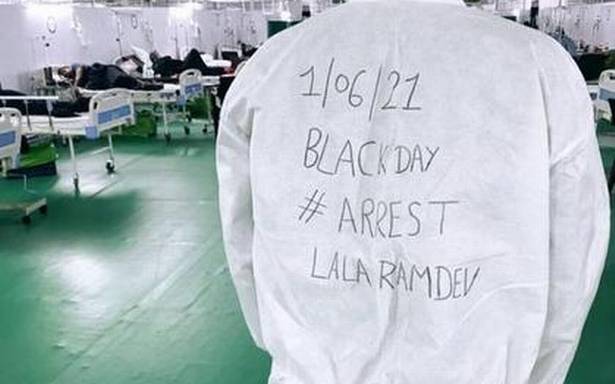 Issuing a call for protest on May 29, FORDA had emphasised that healthcare services will not be hampered due to the stir.

Upset over yoga guru Ramdev’s remarks on allopathy, members of the Federation of Resident Doctors Associations (FORDA) launched a protest in Delhi on Tuesday as part of a nationwide stir, seeking an open apology from him or action against him, FORDA officials said.

Issuing a call for protest on May 29, FORDA had emphasised that healthcare services will not be hampered due to the stir.

“Our protest began this morning against the remarks made by Ramdev, who is not qualified to even speak on the discipline of allopathy. It had affected the morale of doctors, who are fighting day in and day out in the (COVID-19) pandemic. We demand an unconditional public apology from him or action against him under the Epidemic Diseases Act,” a senior FORDA official said.

The RDAs that have already joined the stir are from Safdarjung Hospital, Lady Hardinge Medical College and Hospital, Hindu Rao Hospital, Sanjay Gandhi Memorial Hospital, B. R. Ambedkar Hospital and more will join later in the day, he said.

“Many doctors are wearing black armbands or black ribbons to symbolise the protest,” the FORDA official said, adding, “Doctors in other cities are also joining the stir.” While some doctors held placards bearing protest messages, others wearing PPE kit had “Black Day Protest” scribbled on the back of the medical gear.

In a statement issued on Saturday, FORDA India had said even after raising objections to the statements made by Ramdev, “no action has been taken yet. We are hereby declaring Nationwide #BlackDayProtest on 1st June, 2021 at workplace, without hampering healthcare services”.

“We demand an unconditional open public apology from him or action against him under the relevant sections of the Epidemic Diseases Act, 1897,” the statement had said.

The FORDA has also alleged that Ramdev’s remarks have added to the “vaccine hesitancy” among people.

Vaccination against COVID-19 is currently under way in the country. It started on January 16.

Ramdev was recently forced to withdraw a statement made in a viral video clip, in which he was heard questioning some of the medicines being used to treat the coronavirus infection and saying that “lakhs have died from taking allopathic medicines for COVID-19”.

The remarks were met with vociferous protests, following which Union Health Minister Harsh Vardhan asked him to withdraw the “extremely unfortunate” statement.

A day later, the yoga guru posed 25 questions to the Indian Medical Association (IMA) in an “open letter” on his Twitter handle, asking if allopathy offered permanent relief from ailments.

His remarks had irked the medical fraternity, upsetting both the IMA and the Delhi Medical Association (DMA).