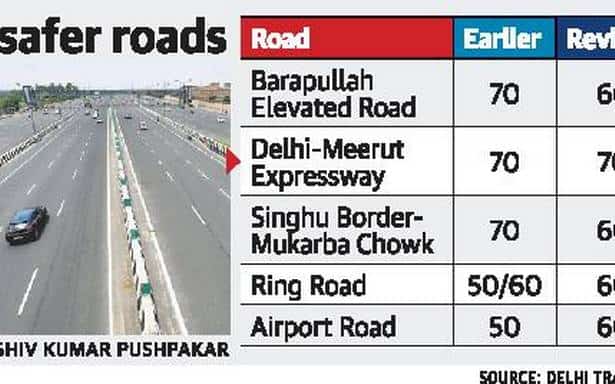 In view of the traffic scenario and safety of road users, the Delhi Traffic Police on Friday enforced revised speed limits for all categories of motor vehicles on National Highways, the Ring Road and other important stretches in the Capital.

The speed limit for taxis and cabs is now at par with private cars on these roads, said the traffic police.

The last revision of speed limits on majority of roads and stretches was undertaken in 2011. Thereafter, in 2017 and 2019, the speed limit for a few roads was further revised, said the traffic police.

The maximum speed limit for two-wheelers on National Highways was 70 kmph, which has now been reduced to 60 kmph.

Meenu Choudhary, Joint Commissioner of Police (Traffic), said: “There have been a number of changes and improvements in the road infrastructure in the city in the past few years, including construction of flyovers, underpasses, high speed/signal-free corridors as well as improvement in vehicle technology. Further, there was a need to make speed limit uniform on Delhi roads as far as possible. Therefore, a revision of the existing speed limits was necessary.”

“The speed limit for all types of transport vehicles, including Gramin Sewa, TSRs, Phat-Phat Sewa, Quadricycle, and N-category vehicles (goods vehicles), has been notified as 40 kmph,” the officer added.

The speed limit in residential areas, markets, service lanes and minor roads is now 30 kmph. The speed limit for loops of flyovers is now 40 kmph. According to a police statement, then Delhi Police Commissioner Amulya Patnaik had constituted a Speed Review Committee under the chairmanship of Taj Hassan, Special Commissioner of Police (Traffic).

The committee included officers from the Delhi Traffic Police, expert members/officials from the Central Road Research Institute Delhi, and the Transport Department of the Delhi government to examine existing speed limits, through a notification dated April 6, 2018.

The revised speed limits have been notified in the Delhi Gazette based on the recommendations of the committee.

The Delhi Traffic Police has requested road-maintaining agencies to erect corresponding speed limit sign boards at all prominent locations, for guidance and convenience of all road users and the general public.