Tales of horror – The Hindu 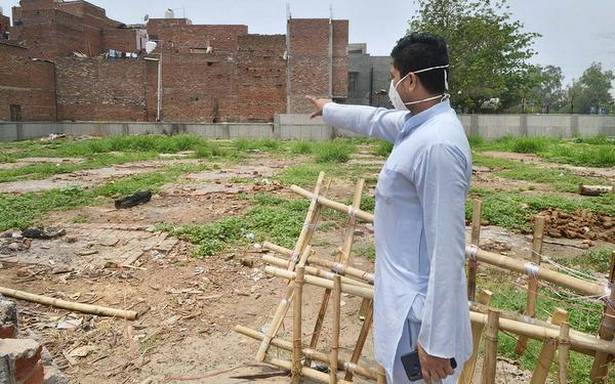 Priests and workers at Delhi crematoriums recall the dreadful period when the number of COVID-infected bodies kept swelling as the second wave raged. They wish never to witness such times again.

It was mayhem everywhere. Bodies wrapped in white were being brought in — in hands and on wheels. Siren of ambulances is all that was heard the entire day. The only sight day in and day out was that of burning pyres, recalled Hemant Kumar Sharma, priest of Seemapuri cremation ground.

Mr. Kumar (29) — clad in a white kurta pyjama — sat in the courtyard of the cremation ground, his mask below his chin, in the company of another priest. There is one pyre burning on the premises with 26 platforms, and another body is due to come. There are hens roaming around…their clucking is now audible.

“It’s relaxed now. There’s probably one COVID-19 body coming in once in 3-4 days. We have time to breathe, eat, sleep, drink water,” he said.

Looking back, he said he had never imagined that he would have to witness such a sight. He wished never to see it ever again.

Walking through the cremation ground, he pointed at an empty space and said they had built nine platforms apart from the 26 allotted platforms. At another space, they had prepared five platforms. Now, what remains of the extra space are huge black spots and a few bricks lying here and there.

Mr. Kumar then walked a few steps and showed an empty field adjacent to the cremation premises.

“This is where children are buried. But when deaths were peaking, we had converted it into a cremation space and built 72 platforms. We had to break a wall to make way for wood,” he recalled.

For more than 10 days in April, over 20 workers here, including priests, sanitation workers and helpers, worked for 24 hours a day and cremated bodies at night as well, against the Hindu beliefs for cremation rites.

“People used to leave bodies outside here without even informing us. There have been so many families who used to leave asking us to send the video of cremation on WhatsApp. We used to cremate those bodies at night,” he said.

Talking about the impact this period had on him, Mr. Kumar said, “During that time, my mother used to forcefully ask me to come home for a few hours of sleep. My family says that I used to chant mantras in my sleep also.”

I am able to sleep now, he added. Mr. Kumar, who has a six-month-old daughter, didn’t hold her for a month-and-a-half out of fear. Back at home, he used to eat and sleep in a corner, trying to stay away from the other family members as much as possible. “Here we didn’t use PPE kits because it used to be so hot. It was impossible to breathe…we used only masks and gloves,” he said.

However, they were all a little at ease because the staffers at the crematorium were fully vaccinated. Mr. Kumar said when the vaccination began, they received a call from government officials and were asked to get vaccinated because they were to deal with COVID-19 bodies.

At Punjabi Bagh cremation ground, plants in the premises had died because pyres were set up right next to them when the number of deaths increased. The plants have now been cut and there’s a semblance of life as new leaves have started to appear.

Now, there are only one or two COVID-19 bodies coming daily and most of the ground remains empty.

But for the inexperienced priests and staffers, seeing the sight of innumerable bodies had an impact, unlike for Mr. Sharma.

“There were days when we didn’t get time to have meals or even drink water. We would start our day at 6.30 a.m. and assist people with the mortal remains. The family members of the victims were seen crying and scared themselves, wondering what to do, where to go. We would only get free around 9 p.m. or 10 p.m.,” said 23-year-old Deepanshu, for whom the images of the pyres are still haunting.

At this crematorium, none of the staffers has been vaccinated. While some of the senior ones are hesitant to get the jab, most staffers are disappointed that no vaccination camp has been set up for them despite their details being listed.

“We received calls from government officials who took our details when the vaccination drive started and they asked us to go to a nearby hospital for the same. When we went there, we filled a form and they told us that our names were not on the list,” said a sanitation worker who didn’t wished to be named.

“We were around COVID-19 bodies and COVID positive patients. We deserved it,” said Deepanshu.

At Lok Nayak Hospital, the area outside the emergency ward now stands deserted and the two white tents installed as waiting area, a few weeks ago, are empty. There are no people waiting outside with oxygen cylinders. No queue of ambulances and no relatives crying and pleading to admit their loved ones.

It’s all gone and everyone’s breathing a sigh of relief.

A civil defence volunteer, Abhay, on duty outside the hospital, recalled his duty at the mortuary “during those days” and all he saw was bodies being wheeled in. “I don’t want to remember it at all.”