The corridor of uncertainty – The Hindu 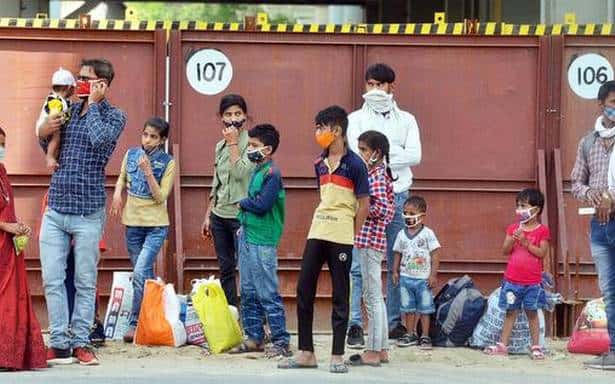 The duration of the lockdown and the uncertainty around it has made life difficult for migrant workers. It has wrecked them emotionally and financially as many stayed back hoping for a better tomorrow

The efforts of governments across the National Capital Region (NCR) to contain the second wave of COVID-19 have only ended up in compounding the misery of daily wagers and migrant workers, the most ravaged and vulnerable group during the pandemic.

To leave or not to leave was the question as the government kept extending the lockdown. No matter what they chose, another significant question arose inevitably. What then?

For some, making the long journey back home meant exhausting their little savings accumulated during the incremental ‘unlock’ phases after last year’s national lockdown. Others either didn’t have enough for a ticket to home or little prospects at home.

“I went back home to Allahabad [Prayagraj] for a week after the lockdown was reimposed for the third time this month but didn’t feel like staying. I’m the eldest son of the family and if I didn’t come back, how would the kitchen run?” asked Sunil Kumar Gupta, who operates a cigarette vend in Greater Noida.

“Weekly earnings are less than half of what they used to be but at least there’s something I can send back home, no matter how little. I could have stayed on. My family didn’t ask me to come back but there was nothing to stay for,” he added.

Since the Uttar Pradesh government’s lockdown orders and their extensions, daily wagers – their belongings stuffed into backpacks – have been gathering near the ‘Zero Point’ on the Yamuna Expressway, from where they could reach Agra, before scattering to locations spread across U.P. and Bihar.

“When I came back after last year’s lockdown, there was less work. But there was work nonetheless. We would take a few hundred rupees less but able to afford more than one meal a day. Now everything is shut,” said Pardeep Kumar, a carpenter, from U.P.’s Faizabad.

“I have just about enough money to manage a week here or go back home. I would rather go back; that way I won’t have to borrow money to pay my rent,” said Kumar, as he waited for a bus on the Yamuna Expressway, hoping to shelter himself from the sun on Friday afternoon.

The past three weeks have been tough on Umesh and his family. The 34-year-old runs an “open saloon” under a tree near a park in Sector 15 Part-II Gurugram.

He would earn a meager sum of ₹200-300 a day, just adequate to make both ends meet. But the three-week-long lockdown in Gurugram this month stopped his income. “It is not easy to survive without work for so long. After the lockdown was announced, I tried to return to my home in Bihar with my family. But it would cost me around ₹8,000 by bus in a sleeper class. I, therefore, decided to stay back,” said Umesh.

Though the government has allowed standalone shops to open from May 24, Umesh said it might take months before a semblance of normalcy returns. Most of his regular clients too have returned to their hometowns and they might not return even weeks after the lockdown is completely lifted, feared Umesh.

For Sheikh Ariful Ali, an embroidery artist, every lockdown extension multiplied the hurdles he has to leap over. While several colleagues have returned to their villages, Ali, a resident of West Bengal, said he had continued living in the Capital with the hope of it “unlocking” soon.

“Every time the lockdown was extended, it was for a week only. So I kept hoping that things will improve and establishments will start reopening. However, it’s been more than a month and it has become increasingly difficult to sustain. Most of our people have left and the remaining few are also planning to leave in a couple of days,” he said.

According to the Migrant Workers Solidarity Network (MWSN), a volunteer group started last year in response to migrants’ crisis, workers in NCR have continued to reach out for basic help like food during the lockdown.

Shreya Ghosh, a member of MWSN, said the distress calls that started in April continued throughout May. Many, who called the helpline, wanted to know when there would be national lockdown since State governments were announcing staggered lockdowns as opposed to a countrywide one last year, she told The Hindu.

In a letter to Delhi Chief Minister Arvind Kejriwal on May 24, she said the Supreme Court’s order on May 13 to State governments to provide dry rations and transport to migrant workers had not reached the people in need.

“Since the order, different State governments made announcements, but they have not reached the people on ground. The government of Delhi, in an announcement six days ago, assured that ration will be provided to migrant workers in the State, as per procedures set in place during the last year’s lockdown. But no implementation has happened,” she wrote.

Ms. Ghosh said the MWSN had received over 4,600 requests from workers and their families in urgent need of ration. The calls had primarily been from workers in Nangloi-Rajdhani Park-Mundka area (410), Dwarka (846), Patparganj (854), Khanpur-Sangam Vihar area (535), Vasant Kunj JJ Clusters (2,156) and Gandhi Nagar (116), she said. She added that workers had reported difficulty in procuring ration after getting e-coupons, so there was a need to increase the number of distribution centres.

“Another pressing concern is the burden of rent, which needs immediate attention. From our distress calls and survey, we have gathered that with job loss, paying rent has become a major financial burden. Urgent intervention is required to ensure that migrant workers’ right to housing is protected. We appeal to you that steps must be taken for rent waiver for workers or provision of a rent allowance for the period of the lockdown to all migrant workers,” she wrote

Sanjay, an autorickshaw driver, now sells tender coconut on a pavement outside a group housing society for his livelihood. Like cab drivers, the autorickshaw drivers too have been hit hard. “I have a family of six to support and could not afford to sit at home for long without an income,” said 39-year-old Sanjay. He brings his teenage son along for help. “He too has nothing to do with the school being shut for over a year now,” said Sanjay, pointing to his son Surya.

Like auto drivers, domestic helps have been affected. Paro, a domestic help, is yet to get back to work though the Haryana government has allowed some relaxation in the lockdown. “The government has relaxed the lockdown, but the group housing society where I work has not allowed the house helps and car cleaners to return to work. My husband, a rickshaw puller, too is out of job. Though we have been living hand-to-mouth for the last one year the meagre savings too got exhausted. Unlike previous years, there has been no help from the social organisations and the individuals,” rued Paro.

Kuldeep Singh, founder president, Buland Awaaz Welfare Society, said a large number of daily wagers had left before the lockdown this year and the companies were mostly running. Therefore, fewer social organisations have come forward to support the poor unlike the lockdown previous year.

Small groups of workers were also seen at the Nizamuddin railway station, returning to their hometowns. On the Yamuna Expressway, migrant workers were willing to pay any amount to board private buses.

Waiting at the station, Chaman Kumar of Mathura said: “This year I thought that things will not be as bad as last time. So I had not returned in the initial days of the lockdown. However, the extensions have now lasted for over a month. How are daily wagers like me supposed to manage under these circumstances? I have no option but to return to my village now. Will take a call later about whether to return or not.”

Parimal Jha from Madhubani has been postponing his trip home for the last four weeks. “I should have left two weeks ago but thought the lockdown would be lifted next week, and then the week after that. Now the ticket is almost double of what it was at the beginning of this month,” he complained

“People like me have no faith left in governments – any government. They should have told us that the lockdown would be in place for the entire month. We would have faced it, made our arrangements. At least, we would not have had to die little by little every week wondering where the next meal will come from or if it will at all,” Jha added.