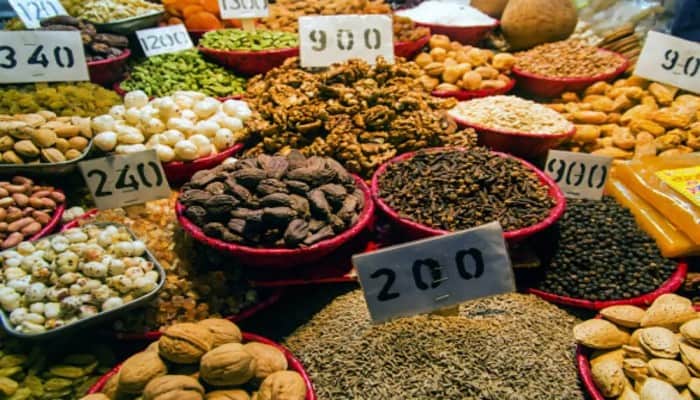 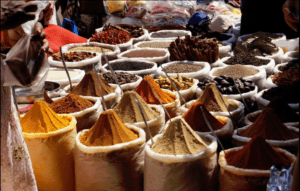 Khari Baoli Market or Khari Bawli is Asia’s largest spice market and is located on the North East side of Delhi. It is one of the most prominent places in Old Delhi. It is in proximity to the famous Chandni Chowk market. It is a supremely busy market and a tourist attraction as it has its roots in the Mughal empire.

This market is popular for the unique spices and condiments of high quality, organic in nature. You can find a variety of nuts and herbs available here. There is a beautiful alleyway with shops lined up, selling a variety of rice, sugar, fresh organic produce and more.

Khari Baoli Market is close to the Fatehpuri Masjid, which was built in 1650 by Fatehpuri Begum, who was one of the wives of Mughal Emperor, Shah Jahan.  It roughly translates to ‘a salty stepwell’ that was constructed during Shah Jahans reign and was used for bathing animals. This stepwell was built along the same time when the Lahori Gate [a fortified gateway situated on the western end of the Red Fort] was built. Lahori Gate is one of the 14 Gateways that surrounded the fortified city of Old Delhi and was called Shahjahanabad in those times. The gate is called so because a road stretching through this gateway leads to Lahore [now in Pakistan]. However, today this road remains closed and buried under the market. Although there is no trace of the Baoli as it is in a dilapidated condition. The Archeological Survey of India has been preserving this monument and working on its restoration.

In 1936, a minister named Chowdhary Chhotu Ram of the Punjab province implemented a law that cancelled all the debts of the villagers. Due to this, a number of traders lost their businesses and migrated to Delhi. They settled and opened their own shops in areas around the walled city of Old Delhi such as Chandni Chowk, Chawri Bazaar, Dariba Kalan, Khari Bawli, Nai Sadak, Naya Bazaar and Sadar Bazaar.

Khari Baoli homes many shops that are still known by their serial numbers. One such shop is 21 Number Ki Dookan which means Shop Number 21 and is run by the 10th generation of its founders. This shop was established in the 17th – 18th century.

This marketplace attracts renowned chefs who come to hunt for perfect spices, nuts and various herbs at wholesale rates. Besides this, it is also flanked by other markets such as the Gadodia Market situated on its southern side and was established in the 1920s by wealthy merchants. This market also homes a number of spice shops. GB Road and the famous Sadar Bazaar are situated on the other end of Khari Baoli.

How to Reach Khari Baoli?

Public DTC Buses, auto rickshaws and taxi cabs can be hired from any corner of Delhi to arrive at Khari Baoli. The nearest metro station is the Chandni Chowk (1.2 km) metro station on the Yellow Line and Tis Hazari (2.9 km) on the Red Line.

The Khari Baoli Market is open every day except Sundays. The shops at Khari Baoli market open generally at 11:30 AM and shut down by 6:00 PM.

Get on the spicey trail and explore Kharo Baoli. Experience History in the present at the market.