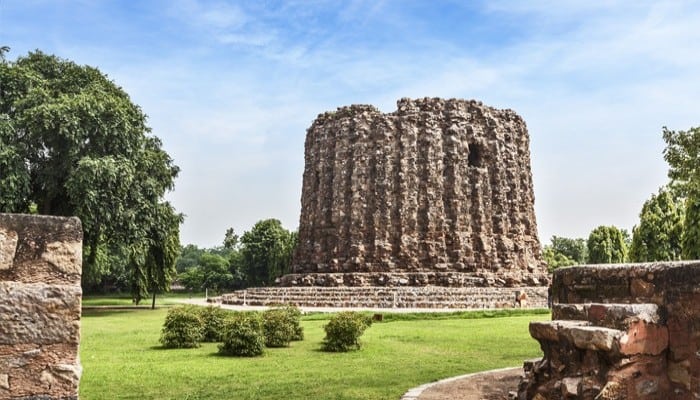 Alai Minar is a partially built historical monument that was made by one of the most rebellious Sultans of Delhi Aladdin Khilji, in 1300 CE, in an attempt to make it reach a height of more than four times what Qutub Minar was. This minar stands 80 feet tall and is located near the Qutub Minar but was left abandoned soon after Allaudin Khilji died in 1361 CE. Khilji was so proud of his achievements that he wanted a minar that was double the size of Qutub Minar.

The Alai Minar is an incomplete monument within the Qutb complex in South Delhi. Sultan Ala-ud-Din Khalji was an over-ambitious Sultan of the Khilji dynasty and won many wars and battles. After a win in one of his Deccan campaigns, the Sultan dreamt of constructing a vast Tower or Minar to commemorate his victory. He wanted a structure double the height of Qutub Minar, to be remembered as the only Sultan who dared to create such a monumental masterpiece grander and more spectacular than the Qutub Minar of Qutb-ud-din Aibak of the Slave dynasty that ruled before him.

He wanted the Alai Minar to match up with the size of the increased height of the mosque and also enjoyed the second tower of victory under his name; hence the Alai Minar began to take its shape.

During the reign of the Khilji dynasty, a renowned Sufi poet named Amir Khusro mentions in one of his works called ‘Tareekh-i-Alai’ the Sultan’s intentions to increase the size of the mosque and the plan to construct the Alai Minar. Amir Khusro was born in 1253 AD in Patiali in Northern India to Amir Sayf-ud-din Mahmud, a Turkic Officer.

Where is Alai Minar situated?

Alai Minar, a structure made out of red rubble, is situated close to Qutub Minar in the Qutub Minar complex, Mehrauli, Delhi. Mehrauli is one of the posh localities in the Southern part of Delhi.

The Alia Minar is located in Outub Complex in South Delhi. You can easily reach the location by various means.

Places near Alai Minar to visit

The Alai Minar and Qutub Minar were situated close to each other. Qutub Minar has got its charm that no one can resist. India’s rich history is enough to make people amazed with wonder and curiosity. The night walk at this monument has been gaining popularity in recent times. The tall structure looks completely magnificent in the warm light.

2. Swarm of the best cafes and restaurants in Delhi

Mehrauli, is one of the poshest areas of Delhi, serves as home to the best cafes, restaurants and eateries in Delhi. If you are inclined towards Italian, Mediterranean and best of cocktails, you should visit Qla, The Grammar Room, Olive Bar and Kitchen, and Lavaash by Saby, among others.

Located 4.5 km from Alai Minar, the newly discovered and high-end Dhan Mill is the talk of the town these days. A unique place that has been gaining popularity due to fantastic cafes, bakeries, designer boutiques, and independent aesthetic stores that will leave you amazed once you visit. Colocal chocolates, Jaywalking, People of Tomorrow and The Palette Café are some of the cafes worth visiting.

1. What is the height of Alai Minar?

Alai Minar is about 2.5 meters tall and was built with the motive to reach a greater height than Qutub Minar.

Alauddin Khilji, one of the Sultans of Delhi, commissioned the construction of Alai Minar in 1300 CE. It is believed that Khilji was rebellious and a boastful leader who wanted to build this Minar, double the size of the Qutub Minar.

3. Why was Alai Minar not completed?

Alai Minar was never completed after Alauddin Khilji, who commissioned the structure, died in 1361 CE and was never taken up by his descendants. The construction was completed up to the first storey and at the height of 24.5 metres, but unfortunately, the construction was abandoned after the death of Sultan Ala-ud-din Khalji in 1316 AD, and the subsequent successors could not continue the further construction as they were defeated. The Tughlaq dynasty took over the Delhi Sultanate.

The Alai Minar depicts the very high ambition, pompous attitude and ferocity of Ala-ud-din Khilji, who wanted to compete by building a structure more elevated than the Qutub Minar, but today is an incomplete mammoth of a foundation that cannot even be compared with the massive Qutub Minar beside it.

The Alai Minar looks like a piece of undulating rubble core that was definitely intended not to look like it does now but would have been ornamentally decorated and covered with stone carvings, intricate design and artwork as Ala-ud-din had planned. Today, it sits silently amidst the other elaborate and stunning structures within its proximity in this Complex.

This incomplete Alai Minar structure today can only mark and set a perfect example for everyone who can see what over-ambition can do to you. The result is always unfinished work and failure.