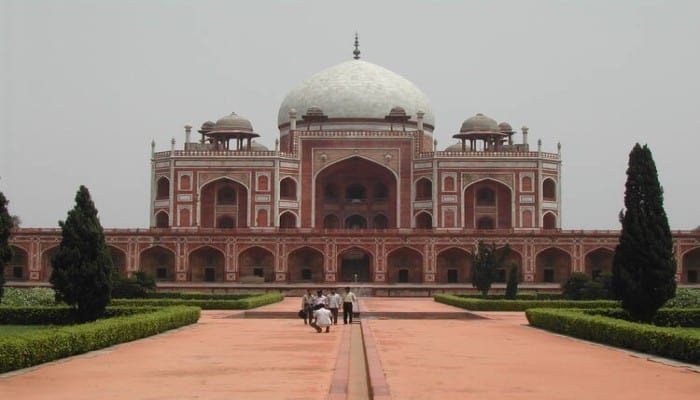 Humayun’s Tomb commonly known by the Indian name of ‘Humayun Ka Maqbara’ is situated in Nizamuddin East and in close proximity to Dina Panah Fort or ‘Purana Qila’ (Old Fort) in Delhi. It can be approached via local cabs, buses and auto rickshaws. The Complex was in fact the first Garden to be constructed with a Tomb in the history of India.

The Humayun Tomb Complex houses various monuments including the famous Tomb of Humayun; all built during the Mughal era, within its precincts. The monuments include the Tomb of Hamida Begum who was the wife of Mughal Emperor Humayun, Tomb of Dara Shikoh who was the son of Mughal Emperor Shah Jahan, Tombs of Farrukhsiyar, Emperor Jahandar Shah, Alamgir II, Rafi Ul-Darjat and Rafi Ud-Daulat.

The Garden spanning over an expanse of 13 hectors where the Tombs and Monuments are located was constructed in the typical Persian Style known as ‘Charbagh’ which means a ‘Four-square Garden’. This style showcases a garden area divided into four equal square shaped gardens separated by pathways and a waterway leading from the centre of the garden right through and underneath the Tomb symbolising Paradise. This site was in fact chosen due to its proximity with the Yamuna River and the Dargah of Nizamuddin Aulia, a revered Sufi and Mystic Saint.

Emperor Humayun passed away on 20th January 1556 after which he was buried within his own Palace in Delhi. Later, his Tomb was shifted by Khanjar Beg to Sirhind in Punjab as instructed by Emperor Akbar (Humayun’s son). Nine years after Emperor Humayun’s demise, Hamida Begum, his wife, decided to construct an elaborate Tomb in his memory. The works commenced in 1562 AD at the cost of Rs. 15 lakh and Haji Begum, who was the Emperor’s cousin sister, supervised the construction and its completion. Mughal Emperor Akbar also visited his father’s tomb in 1571 before it was almost completed.

Humayun’s Tomb was designed by a Persian architect named Mirak Mirza Ghiyas also known to many by the name of ‘Mirak Ghiyathuddin’. He belongs to a small town named Herat in Northwest of Afghanistan and was invited to India to design this Tomb. Mirak Mirza Ghiyas is accredited with numerous works including several monuments and buildings designed by him in Herat, Bukhara (ancient name of Uzbekistan) and India. He passed away before the completion of Humayun’s Tomb and further works was designed by his son, Sayyed Muhammad ibn Mirak Ghiyathuddin up till its completion in 1571 AD.

In 1611, Humayun’s Tomb was graced by the presence of a famous English Merchant named William Finch who admired the Tomb illustrating the elaborate and richly decorated interiors and the well furnished central chamber of the Tomb. He describes the presence of rich Persian carpets; a small tent covered with pure white silk sheet over the cenotaph; the Holy book of Quran placed before the grave and alongside was the Sword of Emperor Humayun with his Turban and Shoes.

The many fortunes that lay within the Tomb of Humayun and its surrounding monuments have seen a change after its completion. After Emperor Humayun’s demise, the capital of the Mughal Empire shifted to Agra 1556 AD and further decline of the dynasty hastened the deterioration of the Tomb and its Monuments. Wealth was limited and the upkeep of the Garden area along with its assets became an impossible task.

The Humayun Tomb Complex and Garden gradually transformed into a Vegetable Farm used by people who had settled nearby. Later, towards the turn of the 18th Century, the last Mughal Emperor, Bahadur Shah Zafar was imprisoned and exiled during the 1857 Indian Rebellion while his three sons were executed by the British. This caused further decay of the Garden and the Tombs of Humayun and his relatives.

In 1860 AD, the British re-planted the entire Garden. Central water pools along the axial walkways of Charbagh were extravagantly planted with beds of flowers and trees which is typical of a British garden style. Later, during the 20th Century, Lord Curzon noticed this imperfection and ordered a complete restoration of the Humayun Tomb Complex. The Project lasted from 1903 AD to 1909 AD wherein the Monuments were re-plastered with red sandstone and the Charbagh or the Garden was reconstructed as per the Mughal Style. In 1915, the garden was re-planted to add emphasis to the central water pools while the axial pathways were lined with trees. The Platform was also embedded with trees which was the only addition not corresponding to the Mughal style of designing as these platforms were originally used for hoisting tents.

During the partition of India and Pakistan, the Humayun Tomb Complex and the Old Fort were used as refugee camps which lasted from August 1947 up till 5 years. This caused inconsiderable damage to the Tombs, the water fountains as well as the main Tomb structure and in order to avoid vandalism, bricks were laid around the cenotaphs to protect them.

Recently, the Archaeological Survey of India (ASI) ensured complete reservation and conservation of the Humayun Tomb Complex. In 1985, the original water features of Charbagh were restored which had earlier failed despite four attempts. In 1993, the Humayun Tomb Complex was deemed as a protected World Heritage Site by UNESCO and the most significant phase of restoration commenced. ASI teamed with the Aga Khan Trust to carefully research and excavate the Complex. Since then, The Garden and the Tombs within the Humayun Tomb Complex have completely been restored.

Humayun Tomb are can be approached from two massive high arc gateways on the South and West measuring two storeys and 16 metres high that leads you into rooms caved on either side of the passage while the upper floor also houses a small courtyard. The Tomb was built of rubble stones and red sandstones clad with white marble. The Dome, the Floor, ‘Jalis’ or Lattice screens and Frames of the door are also clad with white marble. Supported on a vaulted terrace measuring 8 metres high spread over an area of 12000 Sq. Mts., it is square in shape and slightly chiselled on the edges to appear octagonal in shape and to add design and make way for further ornamentation of its interiors. The lower base area of the Tomb Structure also seen on a raised platform and a few steps higher from the ground level made of rubble stones has 56 cells caved in all around the Tomb circumference which homes over 100 gravestones. Taking all these factors into account, the entire Tomb stretches at a height of 47 metres and a width of 91.44 metres.

The Main Monument of Humayun Tomb Complex depicts a unique blend of Indian as well as Persian Architecture which include small canopies or ‘Chattris’ that surround the central dome that were once dressed with blue tiles. The Tomb also showcases the first of a kind Persian architecture that depicts a double layered Dome supported on a high neck drum measuring 42.5 metres and crowned with a Brass pinnacle topped with a crescent as seen in Timur’s Tomb at Samarkand. The outer layer of the ‘double layered dome’ is dressed with white marble while the inner layer provides shape to add to the volume of its vast interiors. The rest of the Tomb is seen in red sandstone decorated with strips of black and white marble and yellow sandstone to add to its visuals.

The rectangular gravestone depicting Humayun’s grave sits at the centre of the Tomb Chamber just underneath the White Dome. It holds a cenotaph revealing that Emperor Humayun’s body is aligned on the north-south axis where in the head is placed on the north and head is tilted to face Mecca according to Islamic tradition. The real burial chamber of the Emperor is way below and underneath this upper cenotaph which is accessible via a separate passage aligned with the main structure that remains locked and prohibited for public view.

The main chamber holds a Mihrab over the central marble lattice screen that faces Mecca or the West. ‘An-Noor’ of Quran is seen inscribed on this Mihrab and its outline allows a strip of light to enter into the chamber from the direction of Mecca or ‘Qibla’ in order to increase the status of Emperor Humayun.

The Tomb chamber of Humayun depicts a high ceiling that houses four principle octagonal shaped chambers on both the storeys and each of these principle chambers homes eight smaller chambers and hence revealing a total of 124 caved chambers. Most of these smaller chambers are seen with cenotaphs belonging to the Imperial families and Nobility of Emperor Humayun including a cenotaph of Hamida Begum (Humayun’s wife) sitting beside another cenotaph belonging to Dara Shikoh (son of Emperor Shah Jahan). This Tomb Complex is also known as the ‘Dormitory of the Mughals’ as it houses more than a hundred graves of which some are known and a few unknown under the main Tomb site and on the first storey.

Even today, Humayun Tomb Complex is undergoing extensive restoration work by ASI. Tourists and visitors can view this complex on all days from early morning hours up till evenings for an entry fee of INR 30.00 per head for Indian Citizens and visitors from SAARC and BIMSTEC countries which comprise of Afghanistan, Bangladesh, Bhutan, Maldives, Myanmar, Nepal, Thailand, Pakistan and Sri Lanka. Children who are 15 years of age and below are allowed free entry while Foreign Nationals need to pay INR 500.00 or $7.50 per head as entry fee.