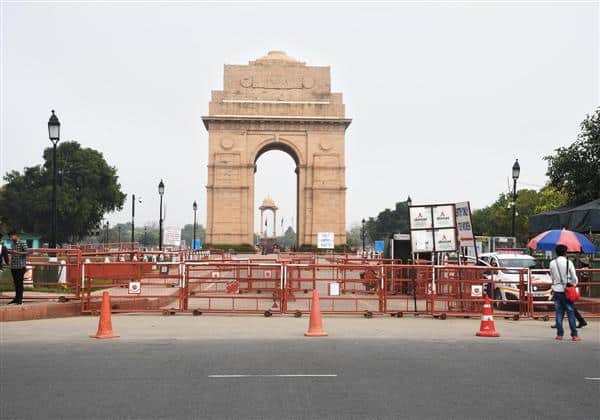 India Gate that in fact lies around the ceremonial avenue of Raj path is an Important and significant Memorial Site completed in February of 1921 and forms the landmark of Delhi also known as the gate of the eight city of Delhi named ‘New Delhi’ which was carved out of the beautifully architected Old City of Delhi created by the Mughal Emperors in the ancient times. It lies in the heart of the new city flanked by roads on all directions and is easily accessible by local taxis, buses and auto rickshaws from any corner of Delhi due to its central location.

This City of New Delhi is probably one of the well planned cities designed by Edwin Lutyens and Herbert Baker around the likes of the British rulers with India Gate and the surrounding areas of Raj path forming the main plan of central Delhi including the Rashtrapati Bhavan formerly known as the Viceroy’s Palace commanding a panoramic view of the city. The view stretches from Raisina Hills running seamlessly across India Gate and Raj path but is hindered only by the National Stadium of Delhi.

India Gate was initially constructed to symbolise as the gateway of Delhi for the British Leaders entering into the Palatial grounds of the Viceroy’s Palace and their surrounding administrative buildings and offices. This form of design was planned to probably imitate the Mughal Style of creating massive and impressive gateways situated at the peripherals of the Palace grounds sprawling over hundreds of acres of land to mark the entry and exit points of the Emperors and Royalties followed by his courtiers and administrative heads. These entrance and exit gateways had a special significance for the Emperors and Sultans through which they enter and leave their kingdom and well protected cities to travel to other parts of the country. India Gate may have once been the pride of the British Empire; however, today it is correctly converted into one of the largest ‘War Memorials’ in India formerly called as the ‘All India War Memorial’ and forms the most prominent, distinguished feature and National pride of Delhi and the Country.

India Gate stands 42 meters tall in height and built in the shape of a huge gateway with round shaped inverted interior dome and two massive square shaped columns or pavilions depicting Indian architecture mounted over a strong low base that is made of red sandstone that tapers upwards in stages to a beautiful embellishment with an arched opening through which Delhi traffic used to once travel across continuously up till the time when the roads crossing and intersecting on all sides of this Gate were closed by Police barricades after repeated threats of terrorist attack.

The two columns of India Gate as a Memorial is seen inscribed with over a lakh of names of Indian Soldiers who served in the British Army and were martyred during the First World War and Afghan War. Even the names of Soldiers who received the Param Veer Chakra Gallantry Award and Soldiers martyred in the 1971 Indo-Pak War and Kargil War are seen inscribed here in memory of their valour, bravery and sacrifices protecting the Country from the clutches and attack of the enemies.

Amar Jawan Jyoti which means ‘Immortal Flame of a Soldier’ is also seen at the centre and under the Gate which has an eternal flame burning and an epitaph ‘Amar Jawan’ inscribed in gold on all four sides. Behind India Gate is a huge vacant canopy also designed by Edwin Lutyens imitating the design of an 18th Century AD Pavilion of Mahabalipuram with a beautifully ornate Chhatri or umbrella shaped covering.

The evenings around the lawns of this gate are crowded with many visitors especially when India Gate is brightly lit up. It is a definite and stunning sight to see for all visitors and tourists especially during Independence Day on 15th August and Republic day on 26th January when the entire contour of Rashtrapati Bhavan and the adjoining Government buildings are draped and lit up with beautiful and colourful lights to mark the speciality of these two days. It makes for a popular meeting point for young and aged couples. Various activities like boating and picnic can be enjoyed here along with the opportunity to taste some great and delicious Indian snacks ranging from Chaats and Pakora to other eateries like Ice creams and Kulfis greatly enjoyed in the summers.