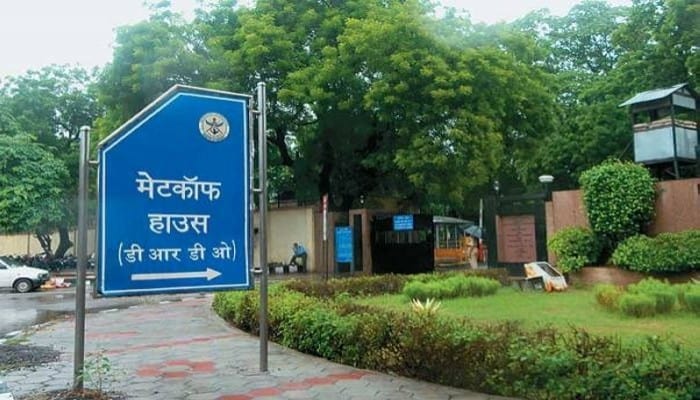 Metcalfe House used to be a residential mansion, built in the 19th Century by Sir Thomas Metcalfe who was the 4th Baronet, a Civil Servant, and the last British resident and Agent of the British Governor General at the Court of the last Mughal Emperor, Bahadur Shah Zafar II. The structure located near Civil Lines was built in 1835 and called the ‘Town house’ initially where Sir Metcalfe lived up till his mysterious demise in 1853. Many believe that he was poisoned by Zeenat Mahal, the wife of Emperor Zafar II. It was constructed in the Old traditional British colonial style but got damaged during the 1857, uprising but was later repaired and inherited by his son, Sir Theophilus Metcalfe. The laborers who built the Metcalfe Mansion often called this House the ‘Matka Kothi’ where ‘Matka’ was short for ‘Metcalfe’ and ‘Kothi’ means ‘House’ as it was hard for them to pronounce his name correctly. After several inheritances, the Government of India acquired the Metcalfe Mansion and converted it into a highly secured residence and official complex of the Defence establishments. Although it is closed for public visits and photography is strictly prohibited, you can still get an exterior view of the mansion.

The architecture of Metcalfe House

Metcalfe named his Mansion ‘Jahan Numa’ which means ‘Showing to the World’ and took great pride in his inheritance built as a massive double storied palatial Indo-European style mansion encircled with wide galleries supported by beautiful stone columns, high ceilings, small windows imitating the Red Fort Palace ventilators. The exquisite architecture of the front of the house is surrounded by beautifully manicured gardens and walkways fringed with cypress trees, orange orchards, and a huge variety of flowers. It had an underground Billiards Room and other ‘tykhanas’ or rooms used mainly during summers for resting and seeking respite from the hot weather. His library hosted over 25,000 books and the relics of Napoleon were proudly displayed in the Napoleon gallery along with exquisite Georgian furniture made of rosewood and beautiful canvas oil paintings.

Sir Metcalfe built another mansion as his ‘Summer Retreat House’ in Mehrauli, as this part of Delhi was considered as a hill station, with many people visiting the place during summer breaks. Metcalfe made sure that the mansion featured manicured gardens and numerous rest houses designed extravagantly. The Boathouse has steps leading directly to the mansion. The other or second Metcalfe House located within the Mehrauli Complex in South Delhi was named by Sir Metcalfe as ‘Dil-khush’ where ‘Dil’ means ‘Heart’ and ‘Khush’ means ‘Delight’ and hence meaning ‘Delight of the Heart’ and also called as ‘The Retreat’ in English.

The Metcalfe Mansion was also leased to many couples on Honeymoon vacations as it provided a panoramic view of the Qutub Minar and the other historical structures surrounding it. Today, this mansion is seen partially in ruins and is enclosed within the recently developed Archaeological Park maintained by ASI within the Qutub Complex and deemed as a protected Heritage site and welcomed for all tourists to visit at a decent entry fee.

How to reach Metcalfe House

Places to visit near Metcalfe House