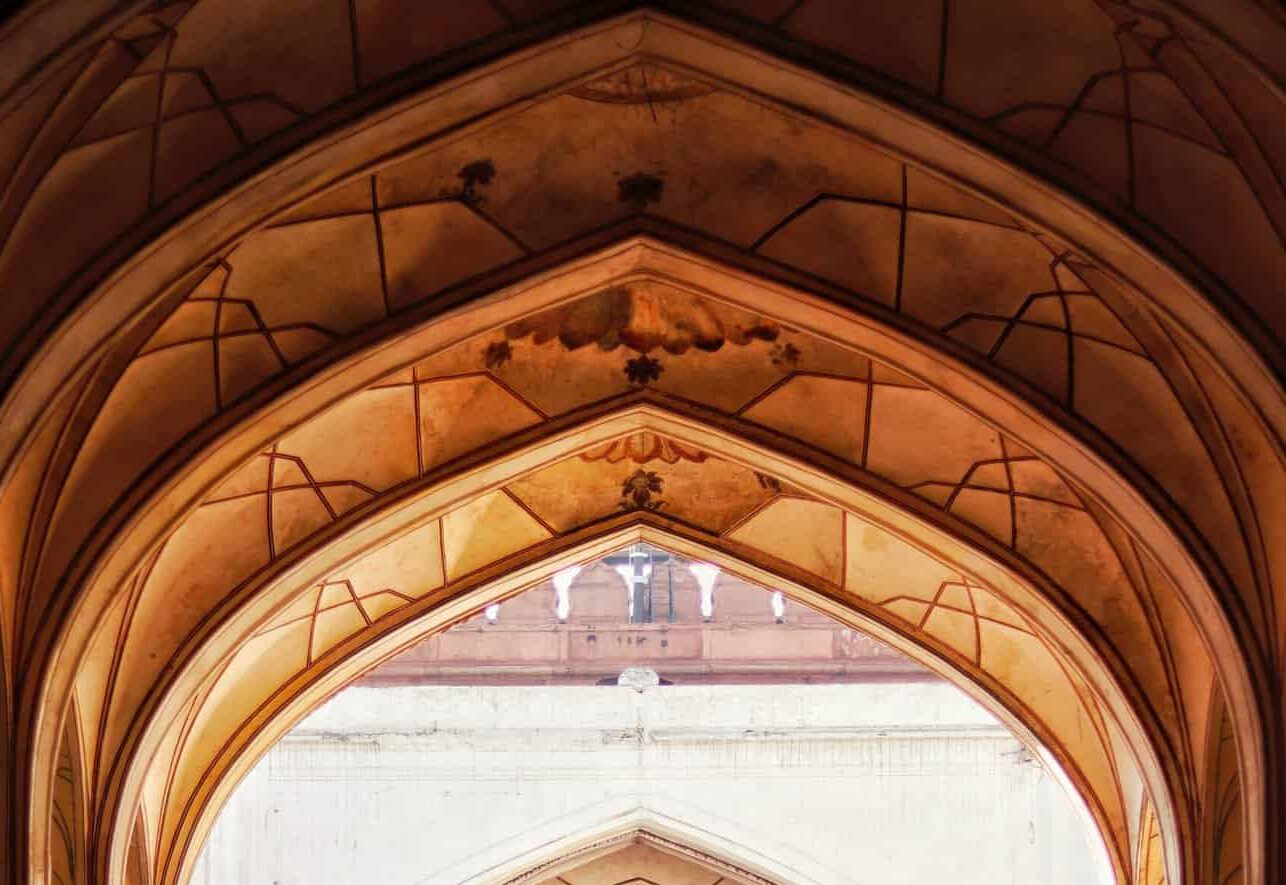 Delhi, the capital city is home to numerous historical monuments and buildings and has a number of forts. It is believed that at one time Delhi was home to seven forts and 52 gates. However, only a few have managed to survive and are still standing.

The seventh city of Delhi is Shahjahanabad, named after its founder Shah Jahan was a walled city with all the needs and necessities within the walls. There were 14 strong gates enclosing the city but only 8 gates survive today. Let us explore more about these eight surviving gates.

The Kashmiri gate lies on the northern end of the city near ISBT (Inter State Bus Terminal) in Delhi.

What is Kashmiri Gate famous for?

This gate is a reminder of the bitter fight between the Indian Freedom fighters and the British Army in 1857 and the outpost of the gate was used to fire cannon balls at the British Army camping at Ludlow Castle.

This Gate was built by the Mughal Emperor Shah Jahan. It was enlarged and straightened by the British to defend the city from attacks.

Why is it called Kashmere Gate?

The gate is so named because it was at the start of a road that led to Kashmir. The Emperors used this gate to exit to the Northern region of India including Kashmir and return via it.

Kashmiri Gate is located at the ISBT Terminal in north Delhi, one of the busiest areas of Delhi. You can easily reach the gate via metro (Kashmiri Gate Metro Station. 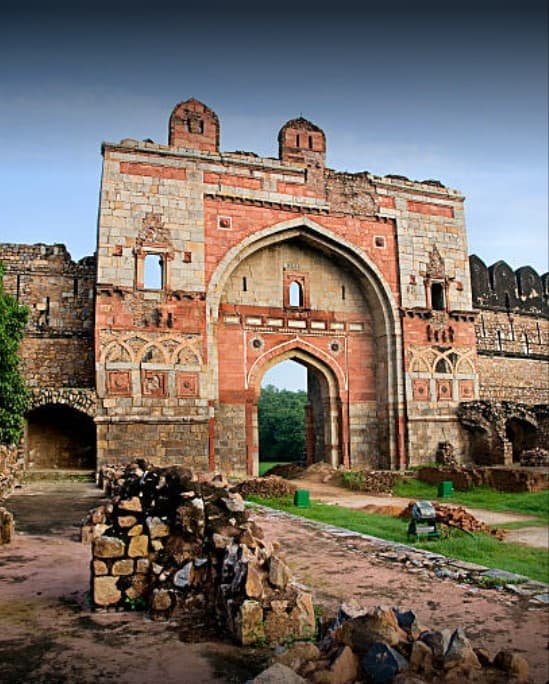 It was built in 1638 by Emperor Shah Jahan. It is a large structure made of sandstone with two elephants carved out of stones on its side.

Why is it called Delhi Gate?

This Gate is called Delhi Gate because it opened towards the east, that is, the direction of the city.

What is Delhi Gate famous for?

Delhi Gate is a protected heritage site and has a huge historical significance. It was the main entry point of the Mughal Army, which camped at the fort and links the Red Fort to the city, however, today entry via this gate is prohibited.

It is located at one end of Red Fort at the edge of Daryaganj. You can take the metro to Chandani Chowk metro station or reach the Red Fort by road. It is open from 7.00 AM to 5.00 PM and the ticket charge for Indian citizens is Rs. 35. 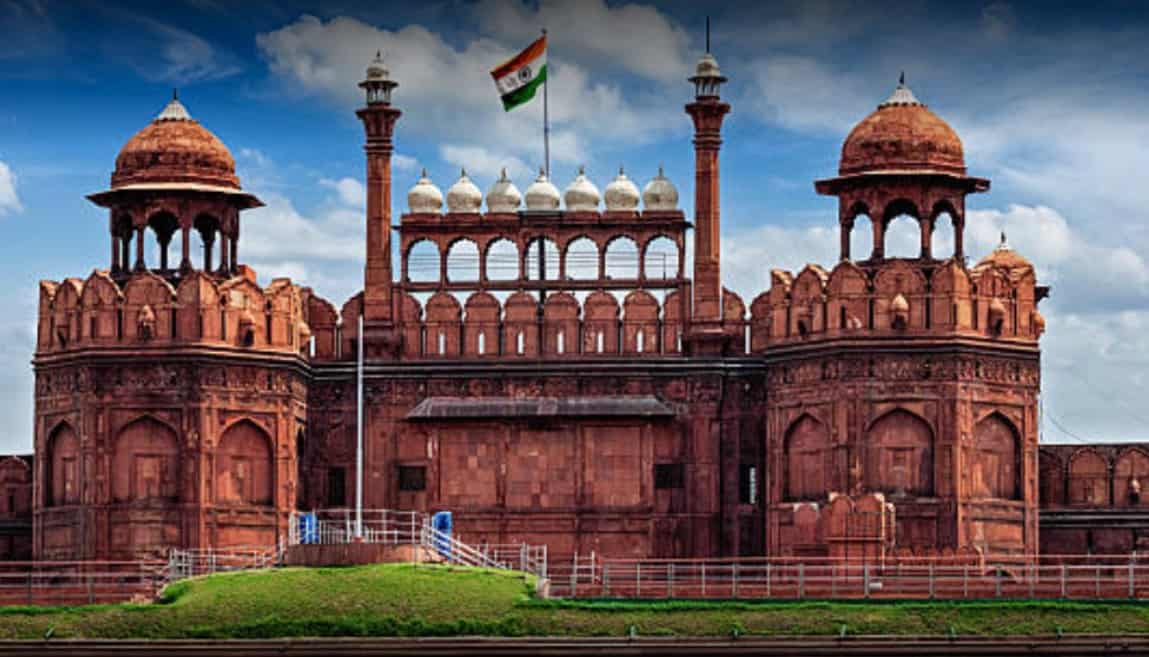 Lahore Gate is the main gate of the Red Fort used to enter the fort at present.

What is Lahore Gate famous for?

The hoisting of the national flag on Independence Day is at the Lahore Gate of the Red Fort by the Prime Minister. The first Prime Minister Dr. Jawaharlal Nehru also unfurled the flag for the first time here on 15th August 1947 and delivered his famous Tryst with Destiny speech.

It was built by the 5th Mughal emperor, Shah Jahan.

Why is it called Lahori Gate?

This gate derives its name due to the fact that it faces the direction of Lahore in Pakistan.

It is located at Red Fort near Chandani Chowk. You can take the metro to Chandani Chowk metro station or reach the Red Fort by road. It is open from 7.00 AM to 5.00 PM and the ticket charge for Indian citizens is Rs. 35. 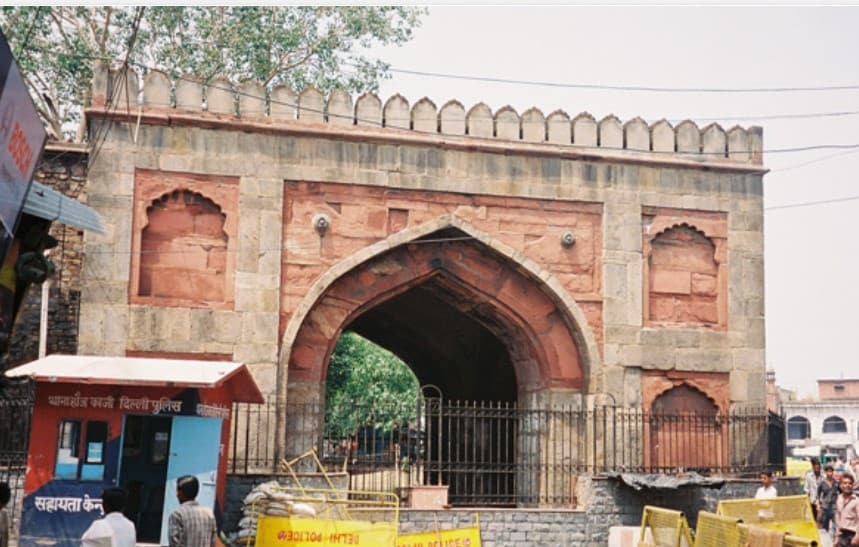 The Ajmeri Gate lies on the southwestern end of Shahjahanabad city or Delhi, and today is situated near the New Delhi Railway Station.

The gate was built in 1811 by Nawab Ghaziuddin Bahadur, the son of the first Nizam of Hyderabad.

Why is it called Ajmeri Gate?

It is situated on a road that leads you to Ajmer in Rajasthan, hence the name of the Gate.

What is Ajmeri Gate famous for?

It saw the first battle for independence of 1857 also known as the Sepoy Mutiny. However, only the western side of the gate is still intact and the rest of the nearby structures were replaced by commercial and residential buildings.

It is located in the crowded area of Chandani Chowk and is surrounded by busy commercial and residential areas. You can visit the gate via road or metro (Chandani Chowk metro station). 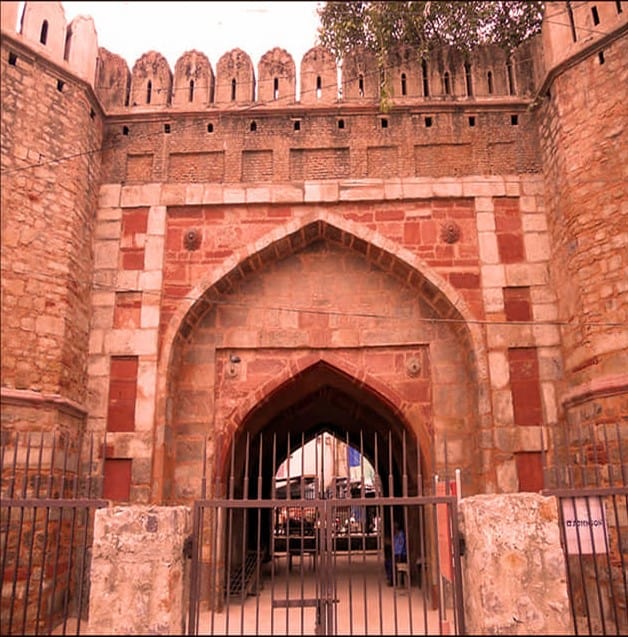 The Turkman Gate lies on the southern end of the medieval city of Shahjahan in Old Delhi near the famous Ram-Lila Ground. This gate also resembles the Ajmeri gate with high ceilings, an arched doorway, and a square-shaped plan.

It was constructed in 1650 by the Mughal ruler Shah Jahan.

Why is it called Turkman Gate?

It was named in honor of a holy Sufi Saint named Hazrat Turkman Bayabani and his Tomb dating back to 1240 can be viewed on the eastern side of this gate.

What is Turkman Gate famous for?

The Turkman gate is famous for the bloody massacre and protest that happened here in 1976 during the Emergency. The government ordered the demolition of illegal settlements in and around the area including a mosque. The locals resisted the demolition and this led to police brutality and the deaths of innocent citizens. Check the details here.

The gate is located near the famous Ram-Lila Ground. You can reach the location by road or metro (Chandani Chowk).

The Delhi Gate and the Ajmeri Gate are also located close by. Razia Sultan’s Tomb and the Kalan Mosque are situated in close proximity. 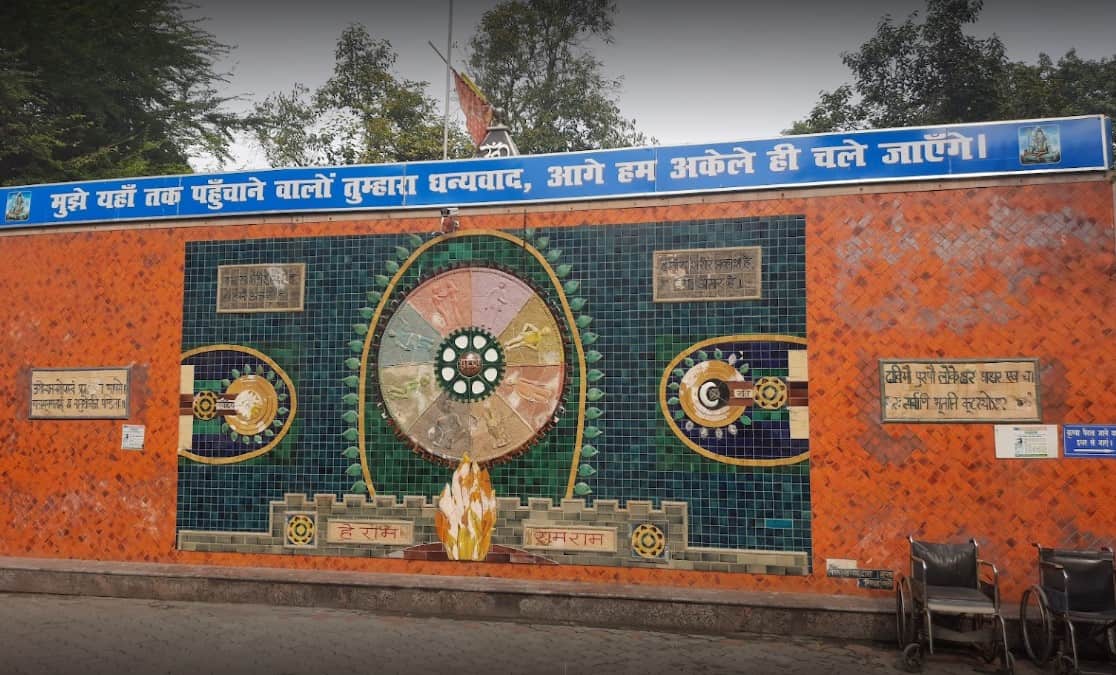 The Nigambodh gate is situated close to the famous Nigambodh Ghats along the Yamuna River.

Why is it called Nigambodh Gate?

It was named after the famous crematorium ground, Nigambodh Ghat, close to the Yamuna River. The name ‘Nigam’ which means ‘Ved’ and ‘Bodh’ which means ‘Knowledge’ was derived from a legend that states the Lord Brahma once took a bath in the Yamuna River at this very place and recovered his lost memory and the hiding place of his sacred books and hence, the gate got its name which means ‘Sacred Knowledge.

The Nigambodh Gate lies on the northeastern end of the City and is situated near the Yamuna Market on the main Ring Road of Delhi. You can reach the gate via metro (Lal Quila Metro on the violet line), or by road. 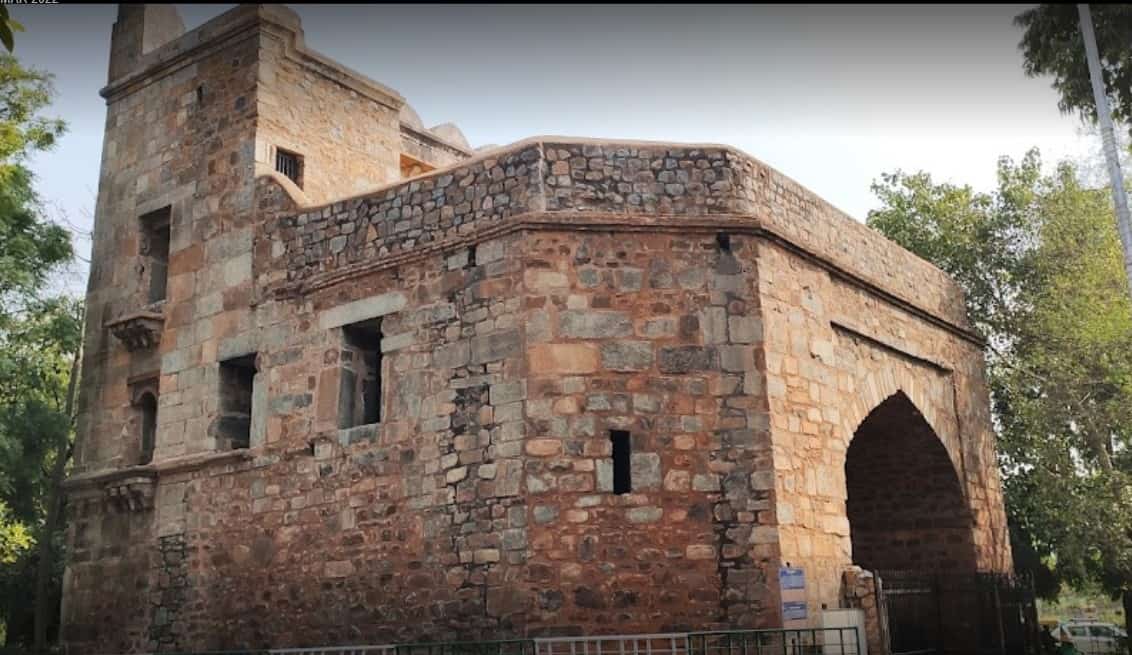 It was built during the reign of Sher Shah Suri in the 16th century.

What is Khooni Gate famous for?

The Khooni Darwaza Gate means ‘Bloody Gate’ and is infamous for numerous horrific incidents. There is a famous story among the locals that during monsoon, one can see blood dripping from the ceiling of this gate.

It is situated on the Bahadur Shah Zafar road and lies opposite Feroz Shah Kotla. The nearest metro station is ITO on the violet line.

In the above article, we have tried to articulate a little history of the city regarding the gates of Shahjahanabad, that bound the city of Delhi from different directions.