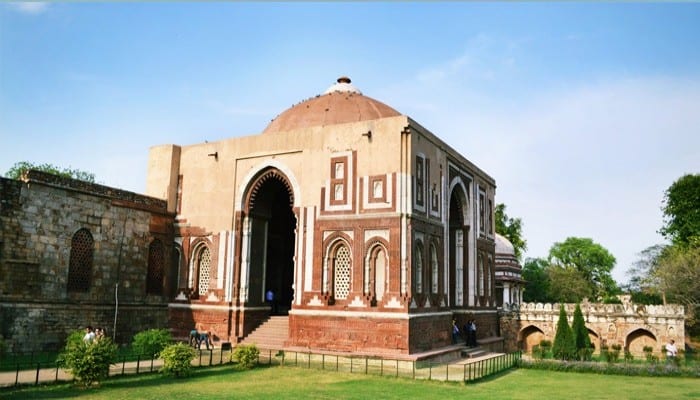 Today we are going to talk about a grand structure that speaks volumes of its times but is still relatively unknown, the Alai Darwaza. Lesser known than the Qutub Minar but completing its essence in a true manner, it is one of the structures in the Qutub complex. We will discuss what the Alia Darwazaa is famous for, its historical significance, how to reach & more.

What is Alai Darwaza famous for?

Alai Darwaza is one of the other lesser-known structures. It is a structure of great historical significance and was in fact designated a World Heritage Site in 1993, along with the other monuments of the complex.

The Alai Darwaza, which translates to ‘Alai Gate’ is the main gateway from the southern side of the Quwwat-ul-Islam Mosque in Mehrauli, Delhi.

The ornamental gateway, chiseled to perfection, was built by Sultan Alauddin Khalji, the second Sultan of the medieval short-lived Khalji dynasty in 1311.

Why Alauddin Khilji made Alai Darwaza?

The geometric design of the Gateway is inspired by Saljuqian characteristics which had immensely influenced the architecture of the Khalji dynasty. This is the first building in India to employ Islamic architectural principles in its construction and ornamentation. The gate is not only huge and magnificent but captivating as it showcases the architectural acumen and the remarkable craftsmanship of the Turkic artisans who worked on it.

The Alia Darwaza is located in Outub Complex in South Delhi. You can easily reach the location by various means.

The entry fees to the Qutub Complex are Rs. 30 per person for Indian tourists and Rs. 500 for foreign tourists. The monument is open for a visit between 7.00 am to 5.00 pm.

Alai Darwaza Gate is a very beautiful structure and rightfully deserves a visit as it provides us with a nice example of the time of the Delhi Sultanate architecture and how they created something as magnificent as this monument standing tall in Delhi’s Qutub Complex.