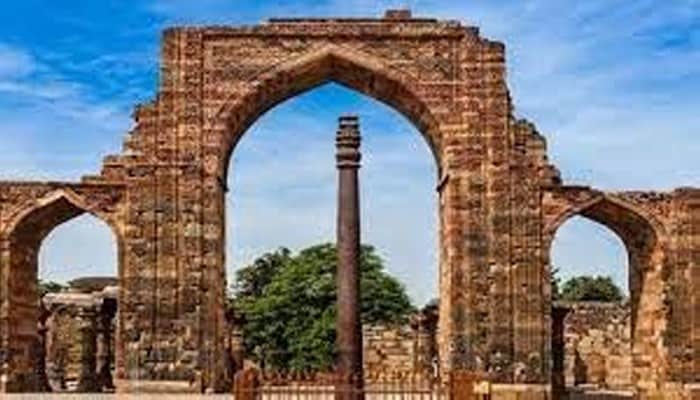 The Iron Pillar was originally established in 402 AD in the front courtyard facing the Vishnu Temple as a ‘Vishnudhwaja’ which is in honour of Lord Vishnu atop Vishnupada, a small hillock at Udayagiri in Madhya Pradesh by Chandra Gupta II who ruled between 375 CE and 414 CE. It was later moved by Sultan Iltutmish in 1233 AD from its original location to where it stands today within the Qutb Complex in South Delhi.

This Iron Pillar speaks volumes of the ancient art of metallurgy and their inherent skilled techniques to forge such a remarkable masterpiece which weighs 6 tonnes. It stands 7.21 metres tall with a beautifully carved base measuring 48 cm in diameter which weighs 6.5 tonnes and gently tapering to about 29 cm at the tip consisting of a 646 kilos ornate bell and the rest of the pillar weighing 5865 kilos. This Pillar is probably one of the most amazing structures to have existed through the centuries withstanding the corrosion of time and hence triggering all those curious minds. The decorative top of this pillar is seen with a deep socket that is probably believed to be where the statue of Lord Garuda or the ‘Sun Bird’ was embedded which was a significant feature seen on many pillars like this one.

This Iron Pillar has intrigued many minds as to its stunning corrosion free and non rusting surface though many have experienced the fact that wrought Iron does rust with time but this pillar seems to remain unharmed and looks as good as new despite it being 1600 years old. Numerous Scientists, Archaeologists, Historians and Metallurgists have put their minds together to understand this mystery and some conclude that it is probably due to the way it was forged by expert ironsmiths.

In ancient times, iron was extracted and processed so accurately and with the highest quality of wrought iron used especially due to the abundance of metals as opposed to their availability today. The application of high content of phosphorus was considered as a unique technique used during the process of Iron making in those ancient years where the core of the iron was mixed with charcoal and the slag iron particles reduced to steel in just one step. In today’s iron making process, ironsmiths use limestone instead of charcoal to mould the iron into steel which unfortunately results in the phosphorus being wiped away by most of the slag iron particles and hence, most iron products today rust at the mere touch of humidity or change in climatic conditions.

Some theories also state that since this Iron Pillar has high content of Phosphorus and the complete non existence of Sulphur or Magnesium, it prevents the pillar from corroding. Environmental effects also reveal that the pillar was made to withstand a relative humidity of about 70% which is appropriate as the Climate in Delhi despite experiencing four seasons in a year does not exceed that limit at all and maybe this explains the reason why this pillar has not rusted even after a thousand years. Others also state that the slag surface coating used in this Pillar after being forged and the application of clarified butter coating during its usage may have also resisted any corrosion.

Experts from the Institute of Technology like Professor Balasubramanium and a Current Science report suggested that lately, it was discovered that the Iron Pillar has a thin cover of a compound named ‘Misawite’ which is made from a perfect amalgamation of iron, hydrogen and oxygen that has consistently protected this pillar from rusting. This thin film of compound came into existence due the natural catalysis of very high amount of Phosphorus measured as 1% opposed to only 0.05% of the presence of phosphorus in today’s iron products. This catalysis occurred just 3 years after its establishment and since then the layer has increased by 1/20th of a millimetre in thickness after 1600 years.

The Iron Pillar is also seen with Brahmi inscriptions dating back to the 4th Century containing six lines that proclaims the greatness, bravery and victories of the Gupta dynasty. These inscriptions only marvels a King named Chandra but it could refer to any of the Royal Gupta clan which includes either Chandra Gupta I, Chandra Gupta II aka Vikramaditya or even Samudra Gupta, hence, it is unclear and probably buried and lost amongst the bygone generations but whomever it might be, it is evident that the pillar was erected during the Gupta period.

Today, the Iron Pillar is used by many tourists and visitors to test their loyalty, longevity, trustworthiness and many other emotional factors. Many people stand on their backs towards this pillar and wrap their arms around it trying to make their fingers touch each other to prove their truthfulness and fidelity to their loved ones and also to get their wishes to come true as per superstition and many who cannot due to physical factors just quietly leave disappointed. This act became a permanent fixture with this pillar after numerous tourist guides began to flock around this complex trying to make a buck or two by passing such stories and superstitions and thus the act of holding the pillar is viewed with intense delight and has certainly become one of the main reasons to attract many visitors to this complex.