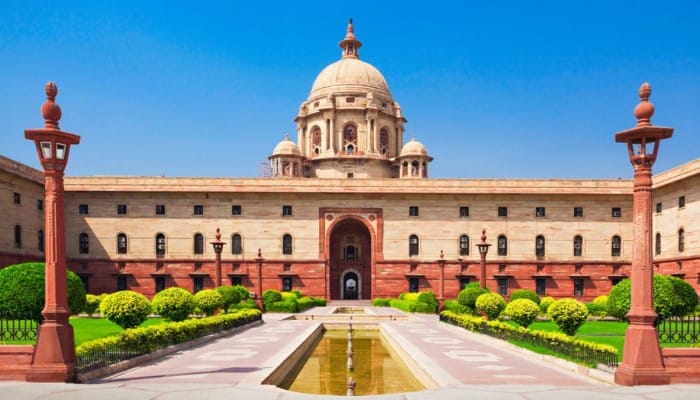 The Rashtrapati Bhavan or the ‘President’s House’ or the ‘Presidential Palace’ was Lutyens’ and Baker’s inspired Imperial architecture that was made to be the residence of the Viceroy and Governor-General of India during the British Rule. Formerly known as the ‘Viceroy’s House’ up till 1950, this structure speaks volumes of a classical design that cohesively blended with both western and Indian styles depicting architectural excellence that marked the identity of Delhi and the seat of the Government of India in today’s modern ambience.

The Rashtrapati Bhavan was constructed on Raisina Hills with its entrance named as Gate 35 on Prakash Veer Shastri Avenue. It is situated in the centre of Delhi earlier named as ‘Lutyens Delhi’ and was inaugurated in 1931 and served as the Viceroy’s residence of India up till India was declared a Republic country. This Palace is still known to be the World’s largest residential complex ever built for Head of any Country.

The Capital of India was shifted from Kolkata to Delhi during the year of Durbar in 1911 announced by King George V leading to an enormous planning and designing of an area that would be a palatial residence of the Governor General of India. The responsibility to design and architect this area was awarded to Edwin Landseer Lutyens who shared the blue print of his design with Herbert Baker who was also given the responsibility to work on this massive construction and designing.

Edwin Lutyens had to travel frequently between India and England for almost 20 years to overlook the entire construction of this Presidential Palace with 355 well decorated rooms up till its completion in 1929. Though the entire building was reduced in size due to budget constraints of Lord Hardinge, Lutyens still managed to complete this beautiful structure built only out of bricks and very minimal usage of steel adding a few elements of Indian architecture like fountains as water has a special significance in India, sculptures of elephants, bas-reliefs, Jalees and Chhajjas etc. hence retaining its natural Imperial grandeur. He also added personal touches of his own like the 2 ventilators designed like his spectacles. The Dome of this Palace was inspired from the Pantheon of Rome depicting European and Mughal architectural style.

In 1947, post independence, a now Governor-General continued his stay here till he was replaced by the President of India in 1950 after which the Viceroy’s House was renamed as the ‘Rashtrapati Bhavan’.

The President of India actually occupies one of the Guestrooms and not the Ashoka Suite that was once occupied by the Viceroys of India due to the last Indian Governor-General Mr. C Rajagopalachari who considered the Master Bedroom too grand for his simple taste. Since then the following Presidents of India follow this trend.