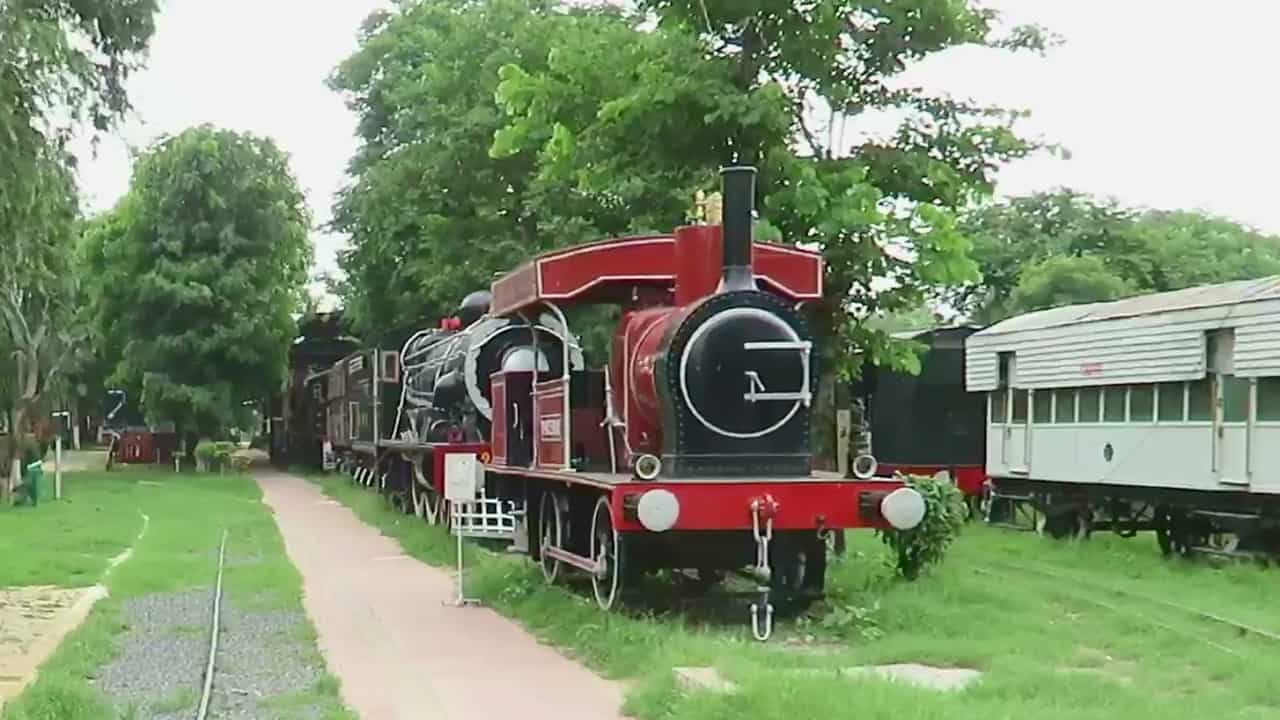 The National Rail Museum lies adjacent to the Bhutan Embassy within the diplomatic area of Chanakyapuri in Shanti Path in New Delhi and is easily accessible by local transport. The concept to establish a centre to display the Heritage of Railways in India began in 1932 after the Government had proposed to set up a Rail Museum in Dehradun. This did not materialise and in 1968, the Ministry of Railways under the Indian Government proposed a location in New Delhi. This was accepted and on 7th October 1971, the foundation stone of the Rail Museum was laid and after its completion, it was officially inaugurated on 1st February 1977. This museum became an instant success with people and children especially and is known as one of its kind in Asia.

The National Rail Museum aims to primarily focus on displaying the rich and ancient heritage of the Railway System and their gradual transition in India and at the same time create interest and educate children and people on the importance and use of Railways in their daily lives. The Museum has an interesting collection of Trains dating since the 19th Century that spans over a large area of 11 acres. It also features an open space that exhibits over 6 gauges out of which 4 gauges are set up on four rails and the various lines of the individual gauges are connected with multi-gauge lines in order to enable their movement. Visitors can easily move around this open yard which enables them to view a display of 100 real Steam, Diesel and Electric Engines and Locomotives, Cranes, Fireless Locomotive, Turn Table, 1892 Girder Bridge, Train Cabins, Coaches and bogeys used by commoners and Kings used for their personal leisure travel purposes that are set up on real railway tracks in order to create a natural atmosphere of a Railway Yard and Junction. All Locomotives and Engines are staged with Carriages in order to showcase a proper perspective of an actual Rail which definitely promises to leave all visitors intrigued and filled with a nostalgic experience.

The National Rail Museum has an octagonal shaped air-conditioned building seen with an Indoor Gallery that is divided into 9 sections that displays a unique collection of real records, photographs, documents, antique furniture, antique clocks, Railway Badges, Metal Passes, Models of Train, Engine, Wagons and Cranes and many other objects relating to the Railway System. There is a separate Section dedicated to the Blind citizens which showcases a text map in Braille. The gradual progress of the Railway System is also shown since its inception starting with normal steam engines to their evolution and development over many decades. Pictorial representation of Telecommunication, Signalling, Architecture, Engineering and Constructions etc. are also displayed within. One section of the Wall depicts a Gallery that focuses on displaying the development of Railways post independence along with their modernisation and future development plans while another section displays a yearly chronological list of Ministers that supervised the Railways and its function under the Ministry of Railways. One interesting display is a Skull of an Elephant.

One of the most popular activities within the National Rail Museum is a ride in the Joy Train that charges INR 10.00 per head for Adults and INR 5.00 for Children below 12 years of age. A ride on the Maharaja of Patiala State Mono Train is an absolute delight that takes you to a bygone era of royal luxurious indulgence. A ride in this train will definitely leave all visitors wanting the journey never to end. It charges Adults INR 20.00 per head and INR 10.00 per Child that is operational only on Sundays. Advance booking for INR 500.00 can also be made on any day except Mondays. Another majestic ride can be experienced in The Fairy Queen which was established in 1855 for the East India Company. This is considered as the oldest and only functional steam engine train in the World which has been maintained and renovated over 142 years and hence features proudly in the Guinness Book of World Records and is a proud recipient of the prestigious National Tourism Award. It was stopped for sometime but became operational on 1st February 1997 from Delhi Station. The Train accommodates 50 passengers and takes them through a once in a lifetime unforgettable experience of travel in complete leisure and luxury from Delhi Cantt to one of the most picturesque town named Alwar in Rajasthan and a ride to the Sariska Tiger Reserve where travellers can spend an exciting memorable time and an overnight stay. Efforts are also being put in place to accommodate people on a trip from Delhi Cantt Railway Station up to Alwar and back after an overnight stay.

A unique sight in the National Rail Museum is a Morris Fire Engine that was built in 1914 by the famous fire engineers of M/S John Morris and Sons Ltd. from Salford in Manchester (England) which was in production up till 1921. Out of the hundred of Fire engines produced, only 2 exist today. One is seen displayed here and the other that was built in 1912 is being preserved by the Enfield and District Veteran Vehicle fitted with the original Solid Shrewsbury and Challiner Tyres. Other Star features are the Darjeeling Hill Railway, Matheran Light Tramway(MLR) & Kangra Valley Railway, Nilgiri Mountain Railways and Kalka Shimla Railways.

The National Rail Museum also features a small Souvenir Shop that sells miniature models of Locomotives and Engines along with other stuff like Key chains, T-Shirts, mementos, shields, puzzles, audio and video cassettes and CDs based on the Rail museum. Visitors can also relax in the Cafeteria operated by IRCTC that is appropriately placed on a water pool with a fountain that keeps the place cool especially during summers overlooking the green lawns. Snacks, Cold Drinks, Coffee, Teas, Biscuits and Chips are available at a nominal rate.

The National Rail Museum is opened on all days except on Mondays and all National Holidays. Timings from April to September is between 0930 hours to 1900 hours while from October to March is between 0930 hours to 1700 hours. Admission fee is INR 10.00 per head for Adults and INR 3.00 per head for children while Educational Institutes can enjoy a concessional discount of 50%. Still Photography is free of charge while video filming is charged extra for INR 100.00 per video camera, Commercial Photography is for INR 5,000.00 and Movie filming is for INR 10,000.00. The Museum also allows free entry for children below 12 years old with a guardian on Tuesdays only; however, School Children need to pay the normal rate.