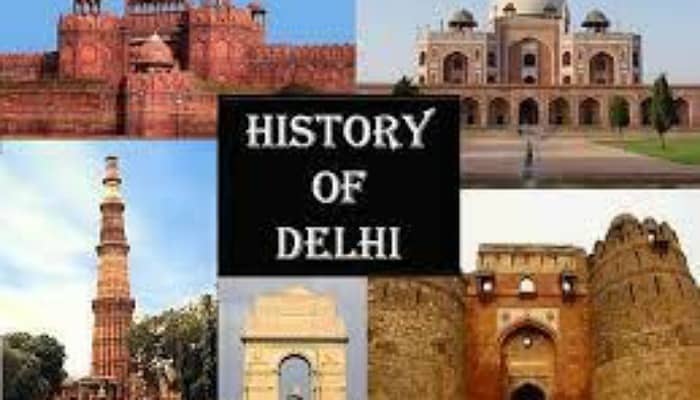 Delhi has a long historical past dating back to the pre-historic 6th Century BC era when it was founded as ‘Indraprastha’, the capital of the Pandavas of the Mahabharata epic. It was earlier known as ‘Hastinapur’ or ‘Elephant City’ according to the ancient Hindu Sanskrit text. It is said that the ancient Indraprast Village existed where the Old Fort stands after which it was demolished by the British to make way for constructing New Delhi towards the late 19th Century. Archaeological excavations in 1966 revealed fragments of grey painted ware dating back to the Pandava era and the remains of 7 cities, relics dating back to the Mauryan Period including two sandstone Pillars with the inscription of Emperor Ashoka [273 BC-236 BC] discovered near Noida in Srinivaspuri that were brought to the city by Firuz Shah Tughlaq in the 14th Century.

Earlier named ‘Dhillika’ and ‘Dhilli’ in short, the first medieval town located on the south-western border of the present Mehrauli area of the City and founded by King Dhillu in 800 BC according to Satyarth Prakash of Swami Dayanand of 1875 CE; however other theories also exists and differ in their own context. This town was the first in the series of seven medieval cities.

From the 8th Century, the Tomar Rajput dynasty reigned. Anangpal, a Tomar Rajput founded Lal-Kot in 736 BC near the famous Qutub Minar in Mehrauli area of Delhi. His name is inscribed into the Iron Pillar that lies with the Qutub Complex of the Chandragupta II era. Lal-Kot was the centre of learning and people spoke eloquent languages. The city gates were gilded in gold and studded with gems. King Anangpal also built a Citadel in 731 BC situated 10 km from ‘Surajkund’.

In 1180, Lal-Kot was conquered by the Chauhan Rajput Kings of Ajmer and renamed it as ‘Qila Rai Pithora’. Later in 1192, King Prithviraj Chauhan III was defeated by the Afghan Muhammad Ghori and since 1206, ‘Dhilli’, was made the capital of the Delhi Sultanate under the Slave Dynasty by Qutub-ud-din Aibak, a former slave who rose to the ranks of a general, then a governor and finally the first Sultan of Delhi. He constructed the famous Qutub Minar but died before its completion. During his reign, he destroyed 27 Jain Temples that had existed then and used its debris to construct the Quwwat-al-Islam mosque. The City was then succeeded by Turkic and Afghan Rulers followed by the Khilji, the Tughlaq, the Sayyid and the Lodi dynasties that ruled during the late medieval period and constructed forts and towns. Later in 1398, Timur Lenk invaded India and left Delhi in ruins. In 1526, in the first Battle of Panipat, Zahiruddin Babar defeated the last surviving Afghan Lodi Sultan and established the Mughal Empire in Lahore, Delhi and Agra.

Later in the 16th Century, Shershah Suri defeated Emperor Humayun, son of Emperor Zahiruddin Babar. Humayun escaped to Afghanistan and Persia and Shershah Suri rebuilt the 6th medieval town of Delhi and constructed the Old Fort or ‘Purana Quila’. Emperor Humayun reclaimed the Delhi Throne with assistance from the Persian Rulers after Shershah Suri reign from 1540 to 1556 and demise. The throne was then succeeded by Akbar, son of Emperor Humayun who moved the capital to Agra and between 1553 – 1556, Delhi was taken over by Hemu Vikramaditya who defeated the Mughal forces of Akbar in Agra. Later Akbar reclaimed the throne after defeating Hemu in the second Battle of Panipat. Later Akbar’s son, Shahjahan [1628-1658] succeeded the Throne and moved the capital back to Delhi and restored its fortunes which had then declined and constructed the 7th medieval town of Delhi that was named ‘Shahjahanabad’ after him and now is popularly known as ‘Old City’ or ‘Old Delhi’. Many architectural delights are still visible like the ‘Red Fort‘ or ‘Lal Quila’ and the ‘Jama Masjid‘. Later Aurangzeb grabbed the Throne in 1658 and crowned himself in the famous ‘Shalimar Garden’ or ‘Aizzabad Bagh’ and ruled till his death in 1707.

On February 1739, the Mughal army was then defeated by Nader Shah in the Battle of Karnal. He captured and looted Delhi including the famous Peacock Throne after which a treaty was signed in 1752 for the Marathas to protect the Mughal Throne and its belongings. The Marathas rule accelerated through the entire North and Central India until they were defeated by Ahmed Shah Abdali in 1761 during the third Battle of Panipat and again Delhi remained just a fragment after it was raided by Abdali. On 11th September 1803, the British forces overpowered the Marathas and the Mughal reign over the City and took over Delhi in 1857 and the remaining Mughal territories. Bahadur Shah Zafar II, the Last Mughal Emperor was exiled to Rangoon.

The British moved their capital to Delhi in 1911 and pulled down parts of Old Delhi to construct New Delhi. Government buildings and offices were designed by Edwin Lutyens and constructed in beautiful English Colonial style. The British held the seat of the Government till 1947 and Post Independence, Delhi was still made the seat of the Indian Government with Jawaharlal Nehru as their first Prime Minister of India.

Throughout its History, Delhi was bruised seven times and rebuilt seven times. The City, however, survived against all odds and now stands as the main political, cultural and commercial empire of India.