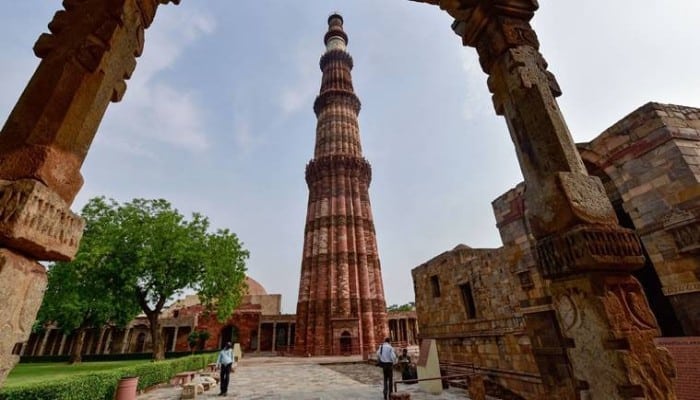 The Qutub Minar also spelled as ‘Qutb Minar‘ and ‘Qutab Minar‘ is one of the most popular tourist sites in Delhi. This majestic cylindrical shaped Tower seen with long rounded grooves embedded with decorative motifs on the shaft of its columns made of red sandstone tapers from a base of 14.3 metres in diameter to its tip measuring 2.75 metres in diameter and made with 378 steps that lead to the top of the tower. This stunning and formidable 72.5 metres tall Monument still stands elegantly within the Qutb Complex in South Delhi. It was constructed during the rule of the first Muslim Turkic Sultan named Qutb-ud-din Aibak (also spelled as Qutub-ud-din Aibak, Qutb-ud-din Aybak and Qutub-ud-din Aybak). The name of this Tower may have been derived from the Sultan’s name itself as he built it but some argue that it was probably erected in memory of Sufi Saint Qutb-ud-din Bakhtiar Kaki who had greatly inspired Sultan Iltutmish (Ruler after Sultan Aibak).

Architecture and History of Qutub Minar

The architecture of the Qutub Minar which means ‘Qutub Tower’ or ‘Qutb Tower’ mimics the Jam Minar and other Minarets established by the Ghurids as seen in Afghanistan. The construction started in 1193 AD by the Sultan Aibak who demolished the remains of the 27 Jain Temples that existed since the Pandava era up till the Tomar ruler who built ‘Lal Kot’ city followed by the Chauhan period who were the last Hindu Rulers of Delhi. In fact, the area where the ruins of Lal Kot existed was used by Sultan Aibak to construct the Tower and its surrounding structures. The fragmented pieces of these Temples along with red sandstones were then used to build the Qutb Minar and the Tower began to take its shape. Sultan Aibak lived only to see the completion of its base and the first floor. Later, his successor, Sultan Iltutmish aka Altamash, the third Turkic Sultan, erected three more storeys over the first floor of this Minar. The fifth and last floor of the Tower was finished by Firoz Shah Tughlaq in 1386 AD, who also furnished the fourth and fifth floors with complete white marble as the fourth floor got destroyed in an earthquake during his rule. He also wanted to add a significant feature like the pavilions and a grand finishing touch to this tower and thus this marvellous structure came into existence.

The Qutub Minar also depicts a blend of Indian and Islamic architecture and hence pioneered in being the first ever magnificent structure that was erected and known to all. Since it was built by three generations of Sultans, it clearly narrates the evident styles that were used on the different floors built by their respective rulers from the Slave dynasty to the Tughlaq (Tughluq) era. The Tower has numerous round shaped tapering shafts that are demarcated by small balconies which are seen with intricate stalactite designs. The first floor depicts circular and pointed ornamental grooves while the second and third floors are seen with star shaped ornamental grooves. The Tower is carved with intricate designs and verses from the Holy Book ‘Quran’ engraved in it. The Tower also has one peculiar line that must have been carved out by a Hindu craftsman while he was working on this Minar. It reads that the Tower was conceived by the grace of Vishwa Karma probably referring to the fact that every inch of this Minar is embedded with the stones of the Holy ancient Temples.

Sultan Aibak may have established the Qutub Minar for numerous purposes known only to him and his generation that are being debated even today. Some theory state that it was created to proclaim the victory and domination of the Sultan and the Islamic province in Delhi or as a Defence Tower from where the Sultan could view any unwarranted signals from the enemies while others state that it was erected as an exclusive tower called as the ‘Minar of Jami Mosque’ for a purpose used by any other minaret from where the Muslim priest known as the ‘Muzim’ or ‘Muezzin’ could lead the ‘Adhan’ or ‘Prayer Call’ wherein he would call upon his people for their daily prayers or the ‘Salat’, five times a day and the Friday Prayer sessions that are held within the Quwwat-Ul-Islam Mosque that lies close to the tower and was also known as the ‘Pole of Islam’.

The Qutub Minar had experienced and resisted several earthquakes like the one in 1505 which damaged the tower and hence was repaired by the reigning Emperor Sikandra Lodi. In 1794, the Minar was again struck by earthquake which partly damaged the pavilions built by Firoz Shah Tughlaq and was replaced by Major Smith with his own and later Lord Hardinge replaced this pavilion in 1848.

The Qutub Minar is surrounded by other ancient and medieval monuments which include an ancient mosque and tombs that form a part of the famous ‘Qutb Complex’ which is deemed under the UNESCO World Heritage Site as a protected area. The Qutub Minar attracts numerous tourists and visitors from across the globe beating the number of tourists visiting the elegant ‘Taj Mahal’ by 13.55 lakhs in 2006. It is opened on all days between 1000 hours and 1700 hours with an entry fee of Rs. 10/- per person for Indian Nationalities and Rs. 250/- per person for Foreign Nationalities (Subject to Change). Photography is free however Video camera is charged at an extra rate of Rs. 25/- per camera.